Wrestling’s fake, right? It’s all stage-managed to draw the crowds. But it’s a very serious business for one family in Fighting with My Family. 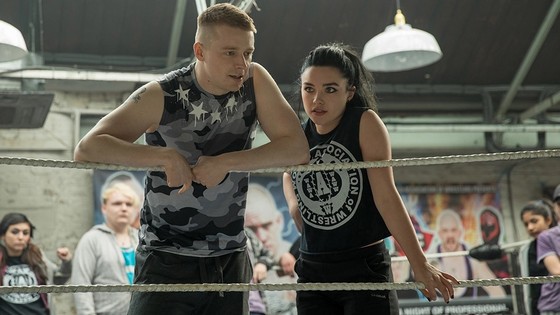 Zak has his heart set on making it on the biggest stage of all, the WWE. He and Saraya finally get a chance to show what they are made of. But only Saraya is chosen and Zak is left heartbroken. But that’s just where Saraya’s hard work starts. She isn’t exactly glamorous and likes dressing in black. She’s thrown in the ring against models and cheerleaders. Then, of course, she has to cope with the physical demands of the sport. Former professional wrestler Hutch Morgan (Vince Vaughn) oversees training, and is quite ruthless in his search for new talent.

Fighting with My Family is the fictionalised version of a documentary titled The Wrestlers: Fighting With My Family. Dwayne Johnson saw the doco and decided to turn it into a feature film. The result is a picture with great heart and some clever one-liners, though many of them are spoiled if you see the trailer.

I particularly liked the portrayal of Florence Pugh, who brought a lot of understated feeling and energy to her role as Saraya. As Ricky, Nick Frost brings his superb comic delivery to bear and the film benefits as a result. Of course there’s no bigger name in wrestling than Dwayne “The Rock” Johnson and every scene he’s in is a winner too.

Far from being just a lightweight comedy though, there’s a lot bubbling beneath the surface. There’s pain and anguish. While the syrup may be laid on a bit thick on occasions, there is no denying the surprising warmth in the script and direction. , Stephen Merchant – the man behind the hit TV series The Office – provided both. He’s done a very fine job with the material here, making Fighting With My Family eminently watchable whether you’re into wrestling or not.

Just one final note, do stay on as the credits roll because you get to see the real Knights.