Joaquin Phoenix is ideally suited to fill the role of an inveterate drinker who pays a horrendous price for his addiction, Don’t Worry, He Won’t Get Far on Foot. Phoenix frequently tackles more obtuse material and appears to revel in it. 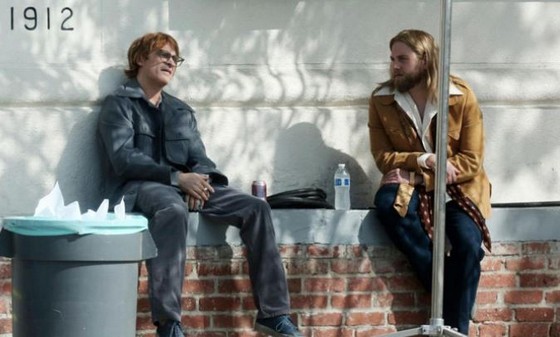 The last day slacker John Callahan (Phoenix), who lives in the US city of Portland, is able to walk, he wakes up without a hangover … because he’s still drunk from the night before. That evening at a wild party he meets a wisecracking drinking buddy (Jack Black), who insists they leave for an even better party that he knows about. But when his new friend dozes off at the wheel, Callahan wakes up confined to a wheelchair with only partial use of his arms.

Though he initially has no intention of getting sober, he reluctantly attends a 12-step meeting run by a charismatic and dedicated sponsor named Donnie (Jonah Hill) and reconnects with Annu (Rooney Mara), a therapist he met at the hospital. With their encouragement, Callahan discovers a hidden talent for drawing, channelling his impish personality into crude, politically incorrect cartoons, which develop a national following and grant him a new lease on life.

Based upon a true story, this poignant drama about redemption is adapted from Callahan’s autobiography and directed by two-time Oscar nominee Gus Van Sant.

As I suggested, nothing appears to be too bizarre or too challenging for Joaquin Phoenix. Around him, the other “fallen” characters are also colourful, many of them larger than life. Like Phoenix, Jonah Hill is compelling as Callahan’s and the others’ sponsor, who has his own issues. And in a film where outrageous behaviour is the norm, Jack Black fits right in as a fellow degenerate whose recklessness sparks a quantum shift in Callahan’s physical abilities. Plaudits too for Rooney Mara, whose empathetic portrayal of a caregiver with a soft spot for Callahan is delightful.

The subversive nature of this material makes it a winner. Van Sant’s nonlinear approach gives it an air of mystery, which makes us have to work at it to unveil the full picture. I appreciated that.

My only real reservations concerned the preachy style of the piece – most apparent in the final act, when it turned from largely unconventional to all but straight – and a bloated running time nearing two hours. So, while I greatly appreciated the first two thirds, I was far less enamoured thereafter.