Based on a true story, the Australian courtroom drama Don’t Tell shares a common theme with the Oscar winning drama Spotlight. Both films deal with themes of sexual abuse, cover ups, abuse of power, truth, justice and the courage to fight against injustice. 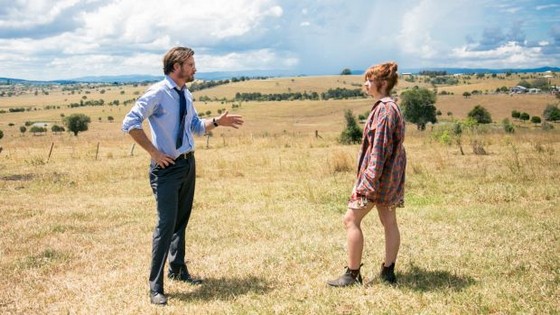 While Spotlight depicted the Boston Globe’s investigation into allegations of sexual abuse within the Catholic diocese of Boston and the systematic cover-up to protect paedophile priests, this local production tells of the efforts of 21-year-old Lyndal (Sara West, from Bad Girl) to seek answers from the Anglican Church hierarchy a decade after she was sexually abused by a predatory housemaster Kevin Guy (Gyton Grantley) at a prestigious boarding school in the Queensland town of Toowoomba. A courtroom drama is far more interesting and compelling than the machinations and procedural approach of a journalistic investigation and Don’t Tell is a riveting and compelling piece of drama.

With her life in ruins – she is a sexually promiscuous alcoholic given over to self-harm – Lyndal seeks redress through the courts. Chosen to defend her interests in court is overworked and idealistic local solicitor Stephen Roche (Aden Young) who is reluctant to become involved in another sex abuse case. His last case ended badly, and dramatically, when his client committed suicide after being humiliated in court. To make matters worse the barrister he has to work with is Bob Myers (Jack Thompson), who was his opponent in that court case. The pair develop a grudging respect for each other during the course of the trial. But to get justice for Lyndal the pair have to prove that the school’s leaders knew of the abuse and did nothing – proving that the school failed in its duty of care becomes a difficult task.

Don’t Tell is based on the book written by Roche, which detailed the landmark 2001 trial that changed child protection laws in Australia. The outcome of the trial also saw the resignation of Australia’s Governor-General, whose reputation was tainted by the cover-up of sexual abuse at the school, and it also saw the Queensland government bow to pressure from the insurance companies to change the law to ensure that civil trials were not heard by juries again. The film also is a very topical examination of injustice, with its suggestion that people in power have always turned a blind eye to sex abuse and past wrongs. However the script, written by a trio of writers drawn from the world of television, seems unusually restrained given the topical subject matter and moral issues, and it never quite arouses a sense of passion or anger.

This is the debut feature film for director Tori Garrett, who hails from a background in television, having worked on series like Wentworth. The film features many of the usual tropes of the courtroom drama, with reluctant witnesses, dramatic revelations, and legal wrangling. There is also a glimpse of the backroom manoeuvring of the school’s board who want to settle and limit the damage. Garrett’s direction is sensitive as she tries to focus our anger on the institutions that allowed such abuse to occur unchecked.

The film looks good too. There is some beautiful cinematography from Mark Wareham (Felony), that gives us a strong sense of location. He also works in close up during some of the courtroom scenes which heightens the emotional resonance and exposes Lyndal’s insecurities. Ross Wallace’s s production design for the courtroom is also great.

Garrett draws great performances from her cast. West follows her strong work as a troubled teen in Bad Girl with another great performance here as Lyndal, and she captures her anger, her confused emotional state, her volatility and vulnerability, and her strength and defiant attitude. Thompson has his best role for quite some time here and brings a measure of outrage and compassion to his performance. His final speech is quite powerful and sums up the audience’s feelings. Young is also good as Roche, and while he brings dignity to his performance this is a less showy role.

The supporting cast features a number of great local actors. Susie Porter and a taciturn Martin Sacks plays Lyndal’s parents, who are eaten up with guilt after having not believed their daughter’s fears about her returning to the school. Rachel Griffiths is good as Lyndal’s psychiatrist, Robert Taylor plays Robert Brewster, the former principal of the school who created a culture that allowed the abuse to occur, while Jacqueline McKenzie is great as Joy Dalton, Thompson’s adversary in court, who does her best to rattle Lyndal and discredit her story. Grantley appears in a series of flashbacks, and is wonderfully creepy as the abusive teacher, whose suicide opens a can of worms.

Don’t Tell is a powerful and disturbing tale, but it is also a story that still has relevance today. Don’t miss it!