With the successful Despicable Me franchise, new kids on the block, Illumination Studios, have rivalled animation giants Pixar and Dreamworks who once set the bar. The success of the Despicable Me franchise is largely due to the scene-stealing antics of the mischievous, diminutive and simple minded yellow creatures known as the minions, who talk in gibberish. 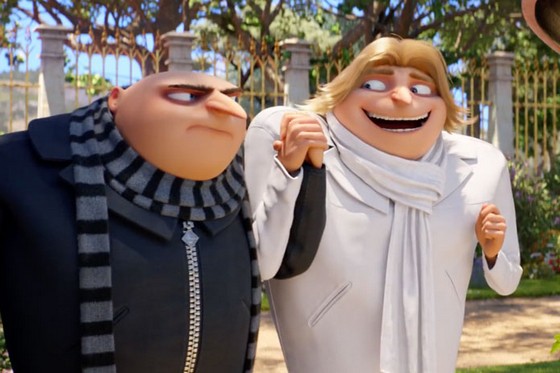 The first Despicable Me told the story of Gru (voiced by Steve Carell), a villain who was softened when he adopted three orphan girls, and who began working for the Anti-Villain League. Its Spy v Spy-like dynamic drove most of the comic action. The second followed that heart-warming trajectory with Gru marrying his fellow AVL agent Lucy White (voiced by Kristen Wiig), and settling down to form a proper family. In the third instalment, the theme of family continues as Gru meets his long-lost twin brother Dru (also voiced by Carell).

When the third film begins, we meet the new super villain Balthazar Bratt (voiced by Trey Parker, creator of South Park). Bratt is a former child star from the 80s who had his own series called Evil Bratt, in which he played a villainous child. But when he reached adolescence, he lost his appeal and his series and has turned to the dark side, leading a life of crime. He has just stolen the world’s largest diamond. He also manages to escape from Gru and Lucy. As a consequence, Gru is fired from the AVL by the organisation’s new head Valerie da Vinci (voiced by Jenny Slate, from Zootopia). He has more time to spend at home with Lucy and their three daughters.

But then a stranger turns up to inform Gru that his estranged father has died and that his twin brother wants to meet him. So Gru takes his family off to Freedonia to meet the brother he never knew existed. Dru however is the polar opposite of Gru – he has a full head of blonde hair, he has a flamboyant personality and is fabulously wealthy thanks to a successful life of crime. But Dru secretly desires to be like his father and Gru and become a supervillain. He pairs up with Gru to steal the diamond from Bratt by breaking into Bratt’s imposing fortress headquarters. This at least leads to some more of the Spy v Spy like dynamics that appealed in the first film.

Despicable Me 3 has a very busy plot, written by series regulars Cinco Paul and Ken Daurio, and takes the series in a fresh direction. Unlike many third films in a series, the Despicable Me franchise shows little signs of fatigue. There is plenty of visual humour here as well as physical slapstick comedy, but there is also a stronger emotional subtext about family and choices running through the material. One subplot follows Agnes (voiced by Nev Scharrel, from Fun Size Horror) as she tries to find a mythical unicorn. Lucy is trying to become the perfect mother for the three girls. And meanwhile the minions try to steal the film with their antics, that include crashing an American Idol like television show and ending up in jail.

Directors Kyle Balda, Eric Guillon and Pierre Coffin (who also provides the voices for the minions) keep things moving along at a fast pace, and there is plenty here to amuse both the younger audience members as well as adults.

Carell does double duty here, voicing both Gru and Dru, but he manages to give each brother a distinct personality. Julie Andrews contributes a brief appearance as Gru’s grotesque mother. Parker makes for a memorable villain here, and the “dance fights” between him and Gru are also quite energetic. The film boasts a great soundtrack that includes Michael Jackson’s Bad, A-Ha’s Take On Me, Madonna’s Into The Groove, and even a sample of the opening riff of Dire Straits’ Money For Nothing. The Happy hitmaker Pharrell Williams also contributes five new, fairly forgettable songs to the soundtrack as well.