In Louis Nowra’s Cosi, Lewis (Sean Keenan) takes on a job directing some patients of a local mental hospital in a “therapy” production of Mozart’s Cosi Fan Tutti. This is not Lewis’ choice but one foisted on him by the thespian leader of the hospital patients, Roy (Robert Menzies), and his enthusiasm will not be brooked. The play charts the development of the rehearsals and first performance, hilarious in its ups-and-downs, as it negotiates the temperaments and obsessions of these “artists”.

Nowra uses comedy as the principal tool to tell this partly autobiographical story.

I have seen many productions of this play, including its premiere at Belvoir Theatre in 1992. I remain uncomfortable with aspects of it, more specifically watching the way the patients are treated as subjects of mirth. A joint production by Sydney Theatre Company (STC) and Melbourne Theatre Company (MTC), this is the first time STC has staged Cosi in more than a quarter of a century.

It is an elaborate production, directed by Sarah Goodes and designed by veteran Dale Ferguson. The set morphs from a gloomy fire-blackened box, pierced by vivid slashes of outside light, to white floor and walls for a rendition of Mozart’s Cosi Fan Tutti. The character’s costumes, too, transform from hum drum, everyday wear to a riotous hotchpotch of colour for the fantasy of the opera.

There are robust explosions of pathos and hysteria, with the vocal work often pitched into higher registers. On occasion that serves to strangle the sound rather than providing narrative clarity. 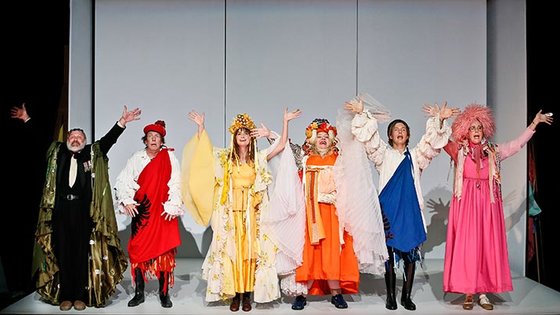 Especially commendable, though is Rahel Romahn as the pyromaniac, Doug. So, too, Glenn Hazeldine as Henry – a dignified but wounded man. Robert Menzies is assured as Roy, as is Esther Hannaford in the dual roles of patient Julie and girlfriend Lucy. Sean Keenan has a stabilising effect as Lewis – providing calm at the centre of the storm, steadily guiding his “actors” as they discover the joy of theatre. Bessie Holland has a big presence and energy as Cherry.

Goodes’ concept and control over proceedings are admirable. Cosi is playing at Sydney Opera House until 14th December, 2019.

Additional Kevin Jackson reviews can be found at http://www.kjtheatrediary.com