Nicolas Cage movies broadly fall into three categories – the good, the bad and the bizarre. His latest film, Color Out of Space – a hybrid of sci-fi, alien invasion and horror, based on a 1927 short story written by H P Lovecraft (who is considered the father of the modern horror story) – falls into the latter category. Lovecraft was also an influence on the likes of modern horror writers like Stephen King, Clive Barker and Anne Rice, but adaptations of his work are few and far between. 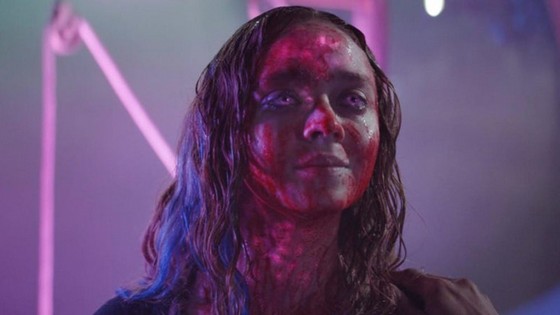 Nathan Gardner (Cage) and his family have moved from the city to start a new life in the rural community of Arkham, where he raises alpacas. His wife Theresa (Joely Richardson) is still recovering from breast cancer and is a little emotionally fragile. Their three children are also having trouible adjusting to life in the country. Teenaged son Benny (Brandon Meyer) is a typical slacker who smokes pot and is addicted to on-line gambling, while daughter Lavinia (Madeleine Arthur) is troubled and experimenting with archaic Wicca religions, and youngest son Jack (Julian Hilliard) seems unsettled. Then one night a meteorite crashes into their front yard and their lives are thrown into chaos.

Strange pink colours, that are actually malevolent alien creatures that hitched a ride on them meteorite, and smells begin to infect the environment, poison the water, and eventually the family, who are driven into a form of madness. Even the animals are affected and deformed. The family find help in the form of Ward (Elliot Knight), a hydrologist who is conducting a study of water tables in the local area.

Color Out of Space is based on the 1927 novella written by Lovecraft, and despite some contemporary touches it remains reasonably faithful to the source material. There have been a couple of other adaptations of the novel, including a 5-minute surreal experimental short film in 2017 and a 2010 German feature length production. The script, written by first time feature writer Scarlett Amaris and director Richard Stanley captures Lovecraft’s dark nihilism effectively, but the result is a tonally uneven mix of sci-fi, horror and black comedy with a strong environmental message. Some of the dialogue is clunky, but there are some gross out body horror elements and gory moments to appease horror fans. The film is also liberally peppered with lots of clever allusions to Lovecraft’s work, which fans of the influential author should spot.

Color Out of Space is the first fictional feature film from South African-born director Stanley in 20 years – he gave us the cult favourite sci-fi thriller Hardware in 1990 and then was famously fired from the troubled 1996 production of The Island of Doctor Moreau which starred a notoriously prickly Marlon Brando and Val Kilmer. Stanley left Hollywood behind and spent the next couple of decades in France. A fan of Lovecraft’s writings, this was something of a passion project for Stanley, and he spent the better part of a decade bringing his vision to the screen.

Stanley and Cage both seem attuned to Lovecraft’s wavelength here. The film features another of Cage’s patented manic nutcase performances and usual tics here as the increasingly schizophrenic Nathan, who becomes hypnotised by the colours emanating from his tv set, and his behaviour becomes more erratic and disturbing. He brings touches of unintentional humour to his manic turn as the increasingly unhinged Nathan. Tommy Chong (formerly one half of the iconic stoner comedy duo Cheech and Chong) delivers a weird performance here as Ezra, the Gardner’s aged hippy neighbour and conspiracy nut, who has belief in extra-terrestrials and who may know more about the strange events that transpire. And Arthur delivers a nicely nuanced performance as the troubled Lavinia.

Stanley and his special effects visual team have tried to capture Lovecraft’s horror here by creating a psychedelic colour scheme here that perfectly suits the eerie quality. The cinematography from Steve Annis, who comes from a background in music videos, gives the material a suitably unsettling pinkish hue.

From the same producers as the nightmarish and over-the-top Mandy, which featured another edgy performance from Cage, Color Out of Space is an atmospheric and unsettling psychological horror film, but it is not for everybody.