Caroline, or Change is a work, an autobiographical work from Tony Kushner. He is famous for Angels in America (1993). Born in Manhattan, his family moved to Lake Charles, Louisiana, when he was a young boy. He wanted to write about race relations, the civil rights movement, and African Americans and southern Jews in the early 1960’s.

This play comes from sorrow, from anger and grief, and also from hope learned from history, from recent history, which has shown us both the terrors and also the pleasures of change, which shows that change, progress is difficult, uneven, uncertain, but also absolutely possible.

The two principal antagonists are Caroline Thibodeaux, an African-American maid working in the Gellman household; and 13 year old Noah, the son of this Jewish family, living in Lake Charles, in 1963, both growing and challenged in a world that is demanding change. 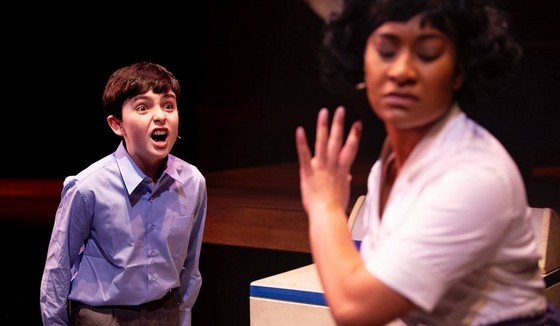 Angels in America is a landmark play that is still celebrated and performed at regular intervals. That work holds a fascination and level of satisfaction like almost no other play in recent history. And though all of Kushner’s output is remarkable, nothing has quite achieved the greatness of that play, in my observation. So how does Caroline, or Change fit?

Caroline, or Change is a musical written over four years of intensive work and first produced in 2002, with Jeanine Tesori as composer. The Hayes produced Violet (her 1997 Off-Broadway musical) and I recently caught her work Fun Home which won the Tony Award for Best Original Score in 2015. It was marvellous. This production, directed by Mitchell Butel, is the first iteration of this work in Australia. I have hung out to see this Kushner/Tesori collaboration over the years for many reasons, the least of which was to make contextual valuations of the writing of the work. Angels… was so intensely, brilliantly, confronting in its political aspirations, and also entertaining, I was deeply curious as to the content and achievement of this work.

Caroline, or Change is an intense observation of the pressure-cooker challenge of the 1960’s for an old-fashioned African-American woman bringing up her young family, as a single parent, in times of sweeping political debate and striving for civil rights, as to whether she can afford to change. She must be able to ensure the stability of her family. Caroline understands the unconscious racism of her employers and makes a choice to endure it for safety’s sake, but struggles to maintain her submission in the argumentative heat blast of her “liberated” daughter, Emmie’s beliefs. Caroline may agree with her daughter but can she afford to do anything about it?

It, also, reveals the struggle of a 13 year old pubescent boy, a Jewish boy, in the midst of great physical and philosophical change as he begins to face the challenge of growth from boy to man and the necessary adjustments he may need to make to respect himself and his actions (this is the Kushner autobiographical reveal) especially, towards his ‘friend’ Caroline – just what is the value of a $20 bill in the great scheme of things? 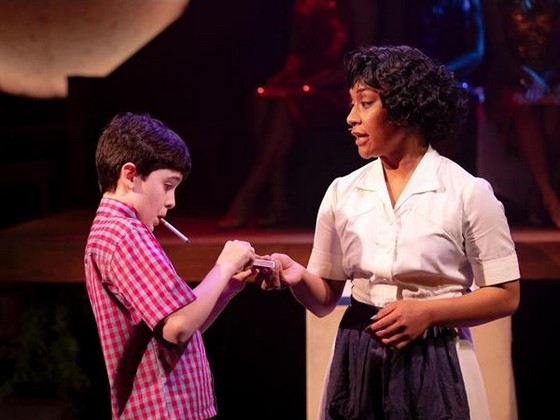 The writing work is complex and relentless. It is naturalistic and also surreal (the Moon sings to us), it is political and dramatically domestic. The musical form is that of gospel/rhythm and blues/folk sung-through in an operetta style. I kept recalling the Aretha Franklin documentary Amazing Grace. To find the cast was and is a challenge for any production of Caroline, or Change. Mr Butel has found an actor/singer, Elenor Rokobaro, to inhabit the difficult role of Caroline, and almost coaches her to assurance. Her performance crystallises in the second act with a wonderfully committed rendition of Lot’s Wife that moves one gratefully, this having been prepared for with the contribution of Nkechi Anele during the pressure-cooker demands of Emmie in the second act. In fact, the second act is when this musical began to realise its spectacular potential. It was when Amy Hack (Rosie Stopnick-Gellman) supported by Tony Llewellyn-Jones (Mr Stopnick) blossomed into power, as well.

The set design is crowded with the demands of the writing and yet fulfills its needs with visual grace by Simon Greer, and the lighting of Alexander Berlage. Choreographically the stage is relatively cramped and Yvette Lee has a company of dancers of varying ability to coalesce as an ensemble. The multiple-role casting, requiring swift dexterity in costume change (Melanie Liertz) by the company, might be solved with the repetition of performance (I saw this production in first preview). Musically the show is in steady hands under the direction of Lucy Birmingham with a live orchestra of six. The sound mix is complicated (Anthony Lorenz) and, as yet, not absolutely balanced.

Caroline, or Change is definitely a must see for Kushner and Tesori fans. Now, I need to hunt down Kushner’s The Intelligent Homosexual’s Guide to Capitalism and Socialism with a Key to the Scriptures and I might die satisfied and happy.