François Ozon is one of France’s leading filmmakers. His movies typically involve characters caught up in circumstances beyond their control, and often feature a clever twist (see, for example, his early Swimming Pool; or his more recent In the House). In By the Grace of God, Ozon strays from his usual style and into an almost cinema verité outing. The result is a film that delivers an important message in a rather dull way. 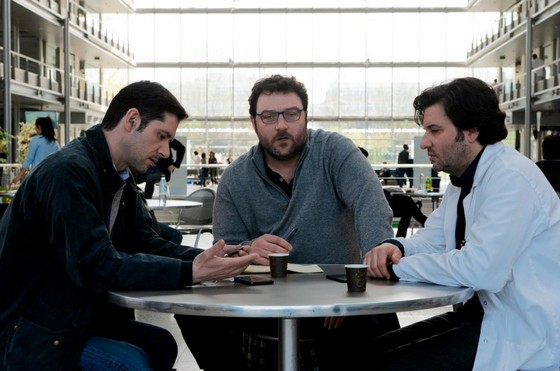 The film examines a real-life scandal involving the Catholic Church in Lyon. Fr Bernard Preynat (played here by Bernard Verley) abused dozens of boys over decades in the Lyon area. Perhaps typically, the diocese sought to deflect by shifting the priest to various parishes – but the outcomes were similar. Devout Catholic Alexandre Guérin (Melvil Poupaud) was one of the victims. Now married with a family, he’s kept quiet about the abuse for years. But when he learns Preynat is still working with children, he decides something needs to be done. He tries going through official channels; specifically to Cardinal Barbarin (François Marthouret) who oversees the diocese. Barbarin seems willing to listen to Alexandre’s concerns, but the end result is delays and little action.

Frustrated, Alexandre reluctantly makes a complaint to the Lyon police about Preynat and about the Church’s cover-up; but on condition of anonymity. The police action eventually reaches another victim, now-atheist François Debord (Denis Ménochet). He’s a journalist, and isn’t about to go through “official channels”. He starts a support and activism group to pursue the case. That in turn brings in Emmanuel Thomassin (Swann Arlaud), a victim for whom life hasn’t been kind.

By the Grace of God dives into horrific subject-matter, so it’s no surprise that it’s tough viewing at time. But as vital as its message about speaking up and speaking out is, I found the film terribly slow going. The typical Ozon flourish seems to be lost in a dogged pursuit of justice. That lawsuits were still going on when it was released in France in February 2019 shows just how passionate Ozon was about the project. Indeed, the real Preynat tried to stop its release, but failed. Those lawsuits have been resolved in the meantime, making the post-script at the end rather redundant.

The film features fine performances, especially from Melvil Poupaud as the dogged Alexandre. But all the performances are great. And the film looks wonderful thanks to Manuel Dacosse’s crisp cinematography. In fact, everything about the film is quality; but I struggled with its long talky interludes. Also, the fact the film was released before all the lawsuits were finalised, means the film lacks a solid ending. It just kind of fizzles out.

By the Grace of God is an important film about a hot-button issue of our times. Ozon gives an object lesson in how different people deal with the same horrific events in different ways. He also shows how organised activism can have a real impact. And he neatly straddles the line between fiction and documentary. I just wish his film had been more exciting.