Billy Elliot The Musical remains as moving and evocative as when I first saw it in Melbourne more than a decade ago … and what a magnificent show it is. For me this is up there with the best musicals brought to the stage. It is based on the successful 2000 film, which starred Jamie Bell as Billy.

Chock full of drama and pathos, with a series of comic interludes, the musical has been brilliantly written and directed, and features a series of stirring numbers penned by the incomparable Elton John. And talk about happenstance … it seems only fitting that John himself was playing his farewell concert to this city only a hop, skip and a jump away, as the opening night theatrical audience was applauding his endeavours.

The performances are superb, elevated by choreography of the highest order, while the staging transports us to the time of Margaret Thatcher’s Britain and the dour struggle by the miners, with a few delightful surprises. I couldn’t think of a better place to celebrate 12-year-old Billy’s rite of passage than in the town’s finest theatre, the Regent.

For those who are not aware of the storyline, it concerns the youngster – whose beloved mother died – and who is being raised by his father and gran. Dad is a mine worker who – along with his fellow underground employees – refuses to accept the Conservative government’s desire to reduce the power of trade unions.

The year is 1984 and major industrial action – which became the longest national strike in British history – has been taken in an attempt to prevent colliery closures. Before it is over, many of the workers will be living hand to mouth as their meagre resources dwindle.

Against this backdrop and the fiery disdain of Billy’s older and militant brother, the kid has no interest in participating in Saturday morning boxing lessons, instead stumbling his way into a ballet class being given subsequently at the same venue. He was just meant to be handing over the keys to the no-nonsense instructor, but is quickly swept up in what he sees and when he finally gets to show what he’s got, his natural talent is obvious.

Encouraged by his teacher, there’ll be hell to pay as his father, brother and the hard-nosed community find out what he has been up to. As they see it, ballet is no suitable pursuit for the son of working-class stock.

The two strands of the narrative – the strike and its impact on the community, and Billy Elliot’s personal struggle for acceptance – are superbly wound together and they are what make the show all the more memorable. It is easy to see why since opening in London in 2005, Billy Elliot The Musical has become a global success story, claiming more than 85 awards.

In 2009 it won 10 Tony Awards, including best musical. Stephen Daldry received the gong for best director and Lee Hall – who also wrote the lyrics to John’s music – received the nod for best book of a musical. Peter Darling was recognised for his choreography and Ian MacNeil for his set design. Billy Elliot The Musical has also collected five Olivier Awards and eight Helpmann Awards, among others.

Among the stirring numbers, none is better than the company’s rendition of Solidarity, with the miners on one side of the stage, the police on the other and a ballet lesson in progress in between. At the start of the second act, a cheeky thumbs down to the British PM in Merry Christmas Maggie Thatcher features hand puppets and a towering blow up figure of the Iron Lady. The fine balance between light and shade is one of the most commendable elements of the musical.

Four gifted alternates fill the pivotal role of Billy. On opening night it was the youngest of them, 11-year-old Melburnians River Mardesic, who had the fancy moves – including tap – down pat. Matching him in his impact and ability is Billy’s cross-dressing best mate Michael, as realised by Oscar Mulcahy (again, there are four alternates for that role). The show’s many highlights include a scene where the pair – in women’s clothing – dance together in front of metallic tinsel curtain foil and are joined by giant dresses and a pair of ginormous trousers. 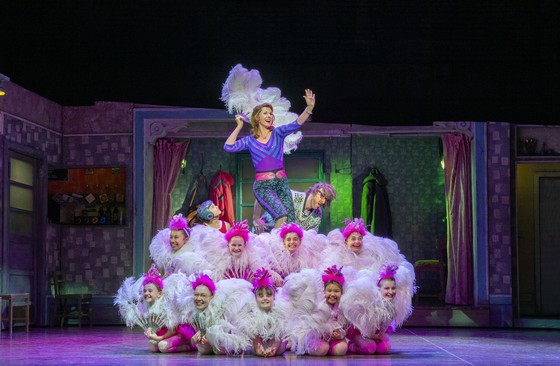 Justin Smith brings gravitas to his role as Billy’s father, Vivien Davies is a hoot as grandma and Drew Livingston is genuinely scary as Billy’s older sibling Tony. Lisa Sontag is a revelation as ballet teacher Mrs Wilkinson, while Robert Grubb makes the most of his persona as Billy’s gruff and frustrated boxing instructor, who works alongside Billy’s dad in the mines. Dean Vince is quite the chameleon as Mrs Wilkinson’s pianist, Mr Braithwaite, who comes into his own as the piece progresses. Special praise, too, for the performance of Ella Tebbutt as Mrs Wilkinson’s brattish daughter Debbie (one of three alternates in that role).

Billy Elliot The Musical stands head and shoulders above most others of its genre. It is something mighty, mighty special that deserves to be seen again and again. It is that good because it stirs the soul and touches the heart. Please do not miss this, the very finest of productions, which is playing at the Regent Theatre until 19th April, 2020. Just be aware that given the subject matter and the passions ignited there is some strong language in the show.