The outsider looking in is one of Sofia Coppola’s directorial trademarks. From Scarlett Johansson’s bewildered American in Tokyo in Lost in Translation to the teenagers breaking into millionaires’ homes in The Bling Ring, she seems to have an affinity for the “other”. In The Beguiled however, she takes the concept in a very different direction.

Here, the outsider isn’t a relatively benign presence through which to observe what’s inside. No, in this case, the outsider is a danger from the outset – a metaphorical fox willingly let into the henhouse. As you might expect, the outcome is disastrous for at least one character. 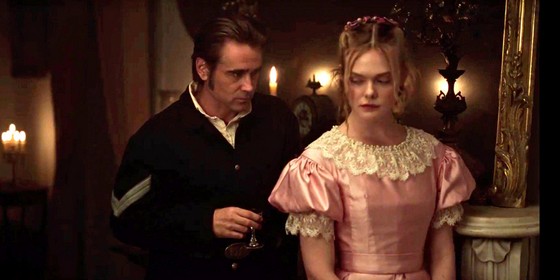 The Beguiled is actually a close cousin to her feature film debut, The Virgin Suicides. Like that film, there’s no gentle romance here. This is raw and brutal. But where the devastation in The Virgin Suicides was at a remove, here it’s up close and personal.

The film is based on Thomas P. Cullinan’s 1966 novel  of the same name. Director Don Siegel made a film version in 1971, starring Clint Eastwood and Geraldine Page. This isn’t a remake of that film. Coppola made several crucial (and somewhat controversial) changes to take the narrative in a different direction. I don’t recall ever seeing the 1971 movie; and if I did, it didn’t make any great impression. I can therefore offer no comparison of the two.

What I can say is that Coppola’s version is worth a look, particularly if you’re a fan of her work. I know many people aren’t though, and if you’re in that camp, this isn’t for you.

It’s 1864 and in rural Virginia, the Farnsworth Academy stands in splendid isolation. While the Civil War rages nearby, Miss Martha Farnsworth (Nicole Kidman) maintains an island of decorum and learning. The five remaining students are girls with nowhere else to go. They’ve either lost their family in the war, or it’s too dangerous for them to return home. Miss Martha and teacher Miss Edwina (Kirsten Dunst) carry on as best they can in the circumstances.

But one day, 11 year-old Amy (Oona Laurence) stumbles on a wounded Union soldier Corporal McBurney (Colin Farrell) in the woods. She takes him back to the Academy, where Miss Martha decides he will be cared for until he can either leave or be turned over to Confederate forces. The presence of a man (even an injured one) in the school causes quite a stir. Precocious Alicia (Elle Fanning) is immediately attracted to him. But Confederate loyalist Jane (Angourie Rice) wants to turn him in as soon as possible. McBurney’s recovery however heralds a tragic turn of events.

Although it runs for only 93 minutes, The Beguiled is deliberately paced. Much of the first half is devoted to setting out the school’s strictly observed rituals. The pace picks up in the second half, leading into a shocking final chapter. Despite some perhaps unintentionally funny moments, the film quietly but surely ratchets up the tension. When the final “twist” arrived, there were audible gasps in the cinema.

As with other Coppola films, this one is a joy to look at. Every shot is carefully composed. At times, it’s like looking at a series of paintings rather than a movie. The production design is exquisite. Even the gorier moments have a strange beauty about them.

The Beguiled operates most effectively in the “negative space”. In other words, what matters most isn’t so much what you see and hear, but what you don’t. For example, at one point McBurney tells Amy she’s his “best friend”. You just know he’s manipulating the others similarly, even though Coppola chooses not to explicitly say so.

We’re also left to fill in the gaps in many of the characters, particularly McBurney. Is he a hero or a coward? At one point, he confesses he “ran”; but he was shot in the leg. Could the wound have been self-inflicted? After all, he says he’s “fresh off the boat” from Ireland, so has no truck with either side in the war. But he also took money to enlist; so perhaps he’s a mercenary. And what of Miss Edwina? She seems to be a proper Southern belle; but her interactions with McBurney suggest otherwise. She seems to be the most logical of the group, but when the chips are down, acts in the most impetuous way. What could she be hiding? Coppola doesn’t explain any of this directly, leaving us to ponder.

Colin Farrell is excellent as the flawed McBurney. He brings light and shade (actually, a lot of shade) to the character. You never know quite where he’s going. Nicole Kidman lends a starched-collar morality to Miss Martha. She brings a fiery determination to the role, which bubbles under a placid exterior. Coppola regular Kirsten Dunst has probably the most complex role of them all as Miss Edwina. She does an excellent job of conveying the character’s repressed worldliness.

I found The Beguiled grew on me. Although this is a subtle and nuanced film, it’s worth the effort. You can find layers of meaning – and some surprises – if you’re willing to look for them.