Fifty-eight people died and more than 520 were injured in the Las Vegas slaughter. Joanna Murray-Smith wrote her powerful and affecting one-man play American Song long before that tragedy unfolded. Unfortunately mass shootings in the land of the free have become all too common.

American Song was commissioned in the US and first produced there last year and now it makes its Australian debut. Mind you, unless you have read anything about it, you have no idea that the impact of guns is central to this reflective piece when you take your seat at the Red Stitch Theatre in St Kilda. 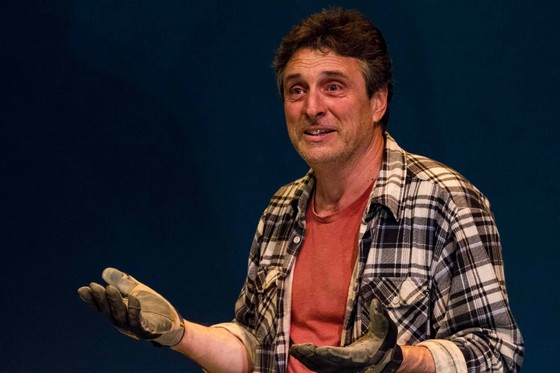 Andy is labouring over a stone wall in a country field as he lays bare his journey with the love of his life, Amy. From when he first set eyes upon her, when they were both at primary school, he was besotted. Mind you, we get the feeling from what he is saying that he was punching above his weight.

Their union, which has produced a son, Robbie, has not always been a smooth or happy one but they have endured. His relationship with  his father-in-law is also fraught. The arrogance and aspiration of his 30-year-old self now long in the shade, Andy is broken; just as the USA is a boulevard of shattered dreams. Now, he is just trying to determine why … how it all started and whether he has gotten the life he deserved.

I can’t think of a playwright whose work I appreciate more than Joanna Murray-Smith (Switzerland). I marvel not only at her prose, but at her ability to tap into the human condition, imperfect that it is. It’s that very imperfection that provides Murray-Smith with the lifeblood to craft so many master works.

With American Song, she has done so again … and how. It is undoubtedly among her very best material, if not the best. She has expertly captured the intimate and intricate detail, the thoughts and aspirations of a middle-aged man whose life has effectively ended … not in the conventional sense of the word, but as good as, given what has unfolded.

Writing a piece that carries such gravitas is one thing, but effectively staging it and carrying it off the way it was intended is quite another. Textually dense and nuanced, it takes a fine performer to learn the lines, let alone deliver them. And hold the audience in the palms of his hands while doing so.

Red Stitch ensemble member Joe Petruzzi has not only done so, but excels in his representation of a man who got ahead of himself. Andy gives up his life story; he talks about his strengths and shortcomings, his hopes and his horrors, while completing the wall. 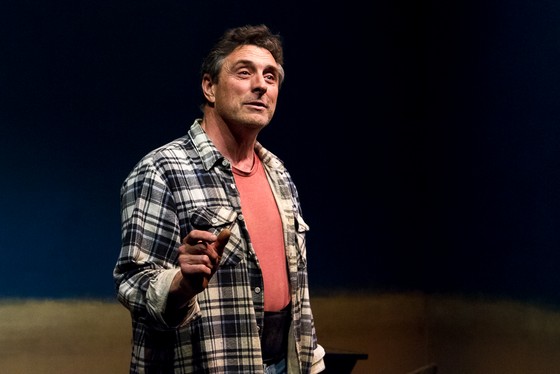 It is an evocative set from Darryl Cordell that makes perfect sense within the confines of the small space that is the stage area at Red Stitch. In a remarkable performance, from which you dare not avert your eyes, the physical activity adds punctuation and emboldens the work. The subtlety of the sound effects by Patrick Cronin and the impact of the lighting by Bronwyn Pringle were not lost on me either.

There are no answers here, rather a deep-seated yearning to know and understand. Our flaws are laid bare and the inward gaze ain’t pretty. American Song is brilliant and compelling theatre, skillfully directed by Tom Healey, with an accent on the minutiae. With a running time of 1 hour 20 minutes without interval, it is playing at Red Stitch Theatre until 5 November 2017.