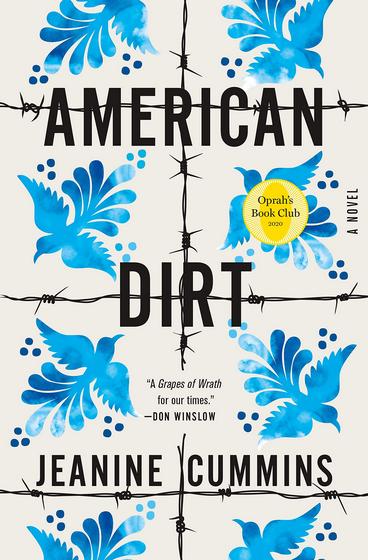 American Dirt opens with a scene that is as shocking as it is gripping. Eight-year-old Luca is going to the toilet when a bullet fired from downstairs narrowly misses him. The next thing he knows he is cowering in the shower with his mother Lydia; below them, assassins systematically slaughter his whole family. This is modern Acapulco, a former holiday town now firmly in the grip of the drug cartels. Knowing that the police will do little to help, and that many will already be in the pocket of those who commissioned the killings, Lydia has no choice but to take Luca,  grab what she can and run, knowing that it may be impossible to escape the long arm of the Mexican cartels.

Following this breathless opening, Cummins delivers a page-turning thriller where there is literally danger around every corner for her main characters. From just being able to leave the cartel controlled state in which they live to jumping onto a moving train (La Bestia), to walking across the Sonoran Desert, the dangers are constant and real. The tension is always high and both the reader and the characters themselves are constantly being reminded that the chance of surviving the journey is incredibly low.

Cummins’s stated aim in American Dirt is to put a human face on the tide of refugees seeking sanctuary in the United States. She does this primarily through Lydia, who is a middle-class bookshop owner until her life is completely upended. As with many thriller protagonists, she is primarily characterised by her mission: an unswerving drive to protect and save her son, a mission that pushes her to extremes of behaviour she had never imagined. Even while on the run, Lydia occasionally has time to reflect that before her life went to hell she did not think much about the plight of those other Central Americans passing through Mexico.

And when she herself becomes one of them, she finds that she has to rely heavily on the kindness of strangers, people who are aware of the risks that she is taking and her need for support.

Through their odyssey, Lydia finds that the wave of refugees is much like herself. Lydia and Luca join up with two Honduran sisters – Soledad and Rebeca – who are also fleeing trauma and violence. But along the way they will also encounter people who have already had lives in the United States, or those who cross regularly to do seasonal work. Whether el norte, the United States, is actually the sanctuary they need is never really questioned by these refugees. For most, the journey is more about what they are running from rather than what they are running to.

Putting aside the furore (if you can), this is a thoroughly researched and in the end compassionate look at what has become a highly politicised subject. Migration, forced and otherwise, is a live issue not only in the Americas but in many other parts of the world. And it is one in which it is easy to lose sight of the human dimension, particularly when political rhetoric and xenophobia come into play.

American Dirt effectively uses thriller tropes and some melodramatic story beats to force readers to focus on the human dimension of this global movement. To put themselves in the shoes of those who are forced to leave their homes to seek a better, safer life. To understand that for many living in parts of the world riven by violence, leaving is the only answer and the dream of some form of sanctuary is a powerful one, no matter how illusory the reality might be. So while American Dirt may not be the literary fiction breakout that some are touting, it is an important work. Never less than tense, and completely compulsive, Cummins manages to both make her point and deliver an effective piece of fiction.