A spectacular romp, a cavalcade of fun and a glittering array of talent await those venturing to Her Majesty’s Theatre to see the crack-a-jack, rolled gold hit that is Disney’s Aladdin, the musical. The genie has well and truly been let out of the bottle on this one. It is based upon the 1992 Academy Award-winning animated film and one of the tales in The Book of One Thousand and One Nights (The Arabian Nights) by Frenchman Antoine Galland.

Aladdin features music by Alan Menken (Little Shop of Horrors), lyrics by Howard Ashman (The Little Mermaid), Tim Rice (Evita) and Chad Beguelin (The Wedding Singer), with a book by Beguelin. It is directed and choreographed by Casey Nicholaw (The Book of Mormon), and produced by Disney Theatrical Productions (The Lion King). 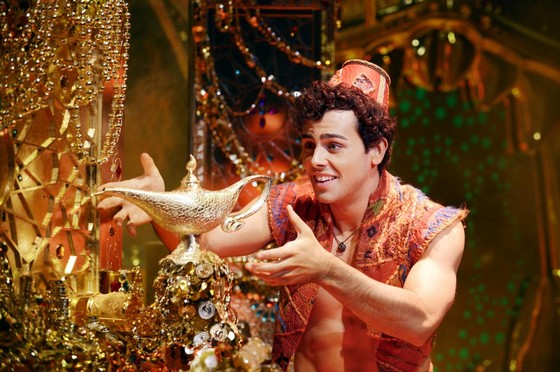 For those not in the know, the story concerns a happy-go-lucky but impoverished young thief that falls in love with a princess who – as tradition dictates – her father is looking to marry off to a prince. The youthful scallywag is also in the sights of a high-ranking court official that sees him as the path to riches … and ultimately to the hand of the princess. But the unexpected appearance of a genie (you know the ones … those that spend their lives in bottles) changes everything.

Michael James Scott acts up a storm, strutting and posing and gesturing, and generally having a wow of a time throughout the show as the genie, immediately winning over the audience with his dynamism and irreverence. A sweet-natured Aladdin (Ainsley Melham) and a new age feminist Princess Jasmine (Hiba Elchikhe) fill their roles with distinction. The masters of wicked laughs Jafar (Adam Murphy) and his evil, diminutive sidekick Iago (Aljin Abella) are a hoot.

The principal cast, among a total of 27 I counted on stage, also features George Henare as the Sultan, Adam Jon Fiorentino as Kassim, Troy Sussman as Babkak and Robert Tripolino as Omar. If reviewed purely on the numbers, the musical already marks itself as very special – 337 glittering costumes, 1,225 different fabrics, 712 styles of beads and nearly half a million Swarovski crystals. “Yes”, the designers have spent up big and it shows in only good ways. Forty tonnes of exotic flying scenery and 60 tonnes of automation and staging have been built into Her Majesty’s Theatre to recreate the fantasy city of Agrabah (near the Jordan River). That includes the boisterous marketplace, the lush palace of the Sultan and Jasmine, and the legendary Cave of Wonders.

The sets and costumes (scenic design is by Bob Crowley and costume design by Gregg Barnes) are artistic works par excellence – highly imaginative, bold and colourful – simply beautiful to behold. Natasha Katz’s attention to detail in the lighting adds greatly to the ambiance. 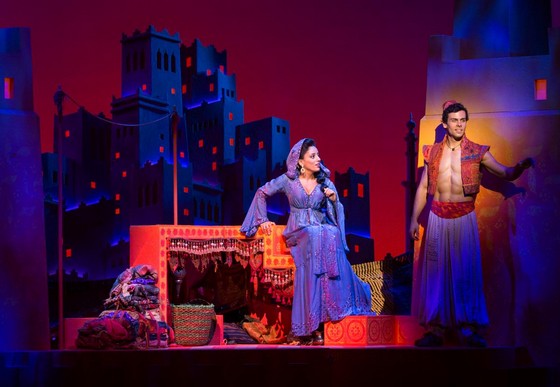 The showstopper in the first act – literally – is one of the finest set pieces in musical theatre (the song that brings the standing ovation being Friend Like Me). That is when the genie makes his presence felt in the cave into which only Aladdin can venture (at least in the first instance) and he, Aladdin, and the troupe sing and dance themselves into a frenzy. Who says all that glitters is not gold, for this slice of seemingly unbridled, unabated, unabashed revelry has to be seen to be fully appreciated.

The songs – 17 numbers in all (nine in the first act and the Oscar and Grammy winner A Whole New World, among eight in the second) – are particularly easy on the ear. Musical direction comes from Geoffrey Castles. This lightweight romance is played strictly for laughs – there is a lot of froth and frivolity throughout, making it a most pleasing family affair. We are literally taken on a magic carpet ride that will warm the hearts of young and old alike.

Aladdin, the musical is playing at Her Majesty’s Theatre in Melbourne until 27th August 2017.

www.theblurb.com.au
Tags: based on a movie, disney, post_tag