American remakes of European movies perhaps don’t have the best track record. But Bart Freundlich’s After the Wedding – a re-working of Susanne Bier’s 2006 Danish film of the same title* – mostly succeeds thanks to some clever writing, sharp direction and fine acting. The action is transplanted from Copenhagen to New York; but the basic architecture of Bier’s film remains. 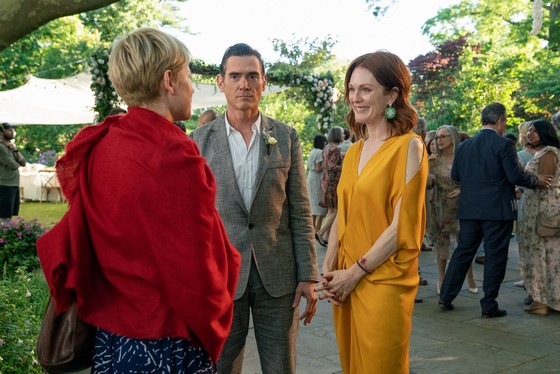 Isabel (Michelle Williams) runs an orphanage in India. While she tries desperately, there are never enough resources for the growing number of children in need. Then, out of the blue, successful entrepreneur Theresa (Julianne Moore) reaches out with an offer. She’s willing to put a million dollars into the orphanage. But she insists that Isabel come personally to New York to discuss the terms. Although she doesn’t want to leave, the lure of enough money to make a real difference is too good to refuse.

Isabel arrives in New York and finds herself put up in a luxury hotel – something she’s definitely not used to. When she meets Theresa, the meeting doesn’t go very far, as Theresa seems distracted. She explains her daughter Grace (Abby Quinn) is getting married the next day; and she’s caught up in the preparations. She invites Isabel to come to the wedding. Although reticent, Isabel agrees. But when she arrives at the ceremony, Isabel recognises a very familiar face – Theresa’s husband Oscar (Billy Crudup). Seems Isabel and Oscar share a past – one brought explosively to light at the wedding reception.

I initially thought I had After the Wedding pegged; even though I haven’t seen the Danish version. It seemed fairly obvious where it was headed. But Freundlich (wearing his screenwriter’s hat) adapts the original in an intriguing way. The story certainly didn’t end up where I expected. Freundlich serves up several juicy twists, and delves deep into his characters. He also produces one of the most elegant visual metaphors of the year.

Freundlich pulls off a masterstroke by flipping the Danish film’s premise so that the key protagonists are the women. This gives the film an added layer, especially in the latter stages when it goes into emotionally fraught territory. Freundlich’s deft handling of the central dynamics is brilliant – especially since her has to juggle at least four key relationships. The real genius of the script is to use those relationships to make some strong statements about imbalances in power and wealth.

The director is aided by some excellent performances from his A-list cast. Williams (I Feel Pretty) is understated but brilliant as usual in the leading role. Freundlich’s real-life wife Moore (Gloria Bell) matches Williams every step of the way as the powerful yet vulnerable Theresa. Billy Crudup (20th Century Women) handles the difficult role of Oscar with an easy charm; while Abby Quinn is a revelation as Grace.

After the Wedding is a surprisingly powerful film about family, choices and power. While it may move a bit too slowly for some, patience will be rewarded if you stay with it.