We get to see very few Scandinavian films outside of film festivals in this country. The Icelandic film industry produces around 5 or 6 films a year, and several directors have gained an international reputation. Recently many major Hollywood productions, including Star Wars: Rogue One and Prometheus, have taken advantage of the country’s strikingly remote and rugged locations, with its coastal and mountain settings particularly suited to the sci-fi genre. The popular HBO series Game of Thrones has shot there as well. 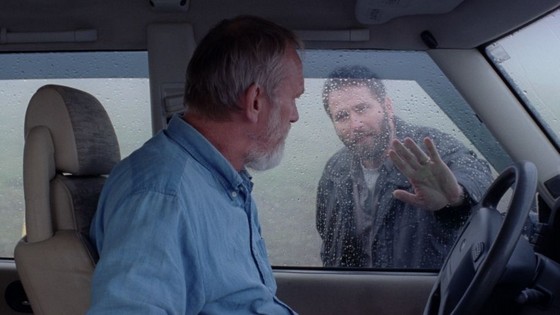 Most of the films from Iceland tend to be cold and the industry does not seem prone to comedy, although films like 1995’s road journey comedy Cold Fever have been successful on the film festival circuit with a winning mix of droll comedy and interesting scenery. And there is a Hollywood remake of the offbeat Rams on the way.

Premiering at the recent Scandinavian Film Festival, A White White Day is a sombre, often grim and slow burn psychological drama and character study that may struggle to find a broad audience. This is the sophomore feature from writer/director Hdynur Palmason (Winter Brothers) and it follows similar themes to his previous film. A White, White Day was Iceland’s official entry for the Best Foreign Language category at the Oscars.

Ingimundur (Ingmar Sigursson) is a local policeman who is on compassionate leave and still grieving over the death of his wife in the car crash that opens the film. He eschews counselling, instead he pours all of his energies and pent up anger into renovating his house, trying to make it a suitable habitat for his daughter and beloved but inquisitive granddaughter Salka (a wonderful and endearing performance from newcomer Ida Mekkin Hlynsdottir). But he is also a volatile person given to sudden outbursts of anger. While trawling through a box of photographs and possessions he begins to suspect that his late wife was having an affair with a local man, and his obsession about uncovering the truth eventually endangers his family. Salka, in particular, experiences the consequences of his outbursts.

A White White Day explores potent themes of grief, reconciliation, family relationships, obsession, secrets and lies, toxic masculinity and broken men seeking release. But there is no happy ending here. Palmason has shaped the film with a deliberate pace, but he also mixes moments of absurdist comedy with slow building tension and touches of pathos. The film has been evocatively shot by regular cinematographer Maria von Hausswolff, and the pair establish a visual language of their own. Von Hausswolff uses static shots and long takes to effectively heighten the tension, and she also brings to life the harsh wintry environment and captures the passing of the seasons. The uneasy mood is complemented by the eerie score from British composer Edmund Finnis.

As the complex, taciturn and deeply flawed Ingimundur, Sigurdsson delivers a performance of smouldering intensity, menacing stoicism and suppressed anguish that held my attention.

Greg King
For more of Greg King’s writing on film, check out his blog at  filmreviews.net.au