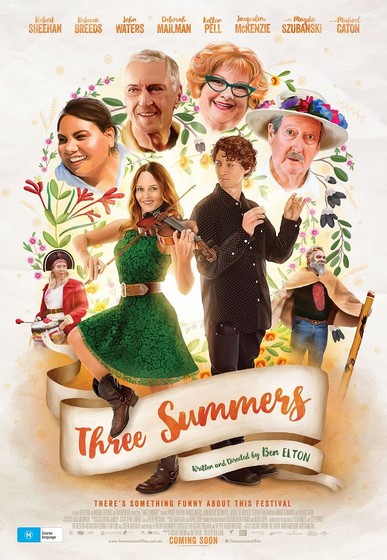 Characters surrounding this awkward romance include a fiercely Aussie Morris Dancer (Michael Caton), an Indigenous dance troupe, a group of wine-loving empty nesters, a power tripping security guard, a wannabe girl rock band and some musical asylum seekers. In fact, all manner of stories collide under the meddling eye of community radio super star, Queenie (Magda Szubanski), who welcomes the campers back three summers in a row for a folking good time.

Fusing romance, music and Ben Elton’s trademark wit and satirical edge, THREE SUMMERS delivers an engaging folk tale of contemporary Australia with the soundtrack and the belly laughs for the summer to come.

Three Summers is Ben Elton’s second feature film as a director. What was his first? Hint: it’s from 2000 and starred Hugh Laurie.