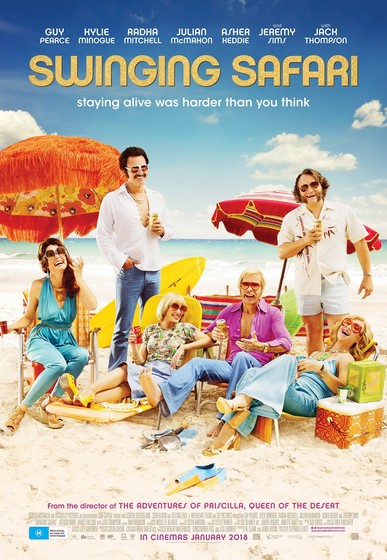 We have 5 double in-season passes thanks to Becker Film Group.

1970s Australia: A 200-ton blue whale washes up on a local beach and the kids think it’s the biggest thing that’s ever happened in their lives. Behind closed doors, the Mums and Dads of a quiet suburban cul-de-sac celebrate in their own special way, by joining the sexual revolution. It’s a time of boxed wine, bad hair, bad styles, bad choices, but good times. And like the rotting whale, it’s all about to go spectacularly wrong.

“Our” Kylie Minogue, who stars in Swinging Safari, is of course a pop culture icon. In 2015 she appeared in which action film that featured another pop culture phenom, Dwayne “The Rock” Johnson?