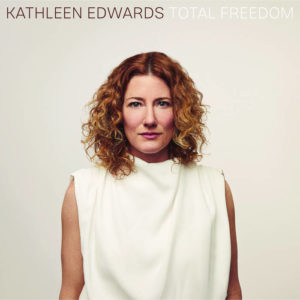 Kathleen Edwards, Canadian singer/songwriter, returns after 8 years of relative silence with another fine album of exemplary folk/pop songcraft. Edwards had built a solid following with four solid albums, including 2012’s Voyager, which was produced by Bon Iver’s Justin Vernon. Edwards left music after touring that album with Vernon, with whom she had a romantic relationship, and has spent the years since operating her coffee shop called Quitters in Stittsville, Ottawa.

Edwards, who’s voice and songwriting has been compared to “Susanne Vega meets Neil Young,” writes about her time with someone like Vernon in the new album’s opening track, “Glenfern.” She describes how they “had a tour bus with a bed in the back/We bought a rock and roll dream, it was total crap/Well, we toured the world and we played on TV/We met some of our heroes, it almost killed me,” before concluding, “I will always be thankful for it.”

We’ve learned to expect that kind of “write what you know, what you’ve lived” honesty from singer/songwriters, and Edwards shares like an open book here on her fifth album. The title, “Total Freedom,” comes from her song, “Birds on a Feeder,” where she embraces her independence and the change of seasons while wrestling with her more difficult “feelings.” And tracks like “Simple Math,” “Options Open” and “Feelings Fade,” find the songwriter sorting out relationship issues, much like everyone else. Even taking on death in “Ashes to Ashes,” she’s got a lovely way with words, and a voice that connects naturally with listeners.

Musically, Total Freedom, is pretty by the numbers for the singer/songwriter genre, good session musicians serving up solid performances to bring her songs to life. One surprise is “Hard On Everyone,” which adopts a guitar tone from Dire Straits’ Mark Knopfler, recalling his album with Emmylou Harris, giving Edwards’ songwriting an added musical punch, something you realize is missing on the rest of the album’s other nine tracks. Still, Kathleen Edwards remains a solid, enjoyable talent, too good to have her disappear from recording entirely.