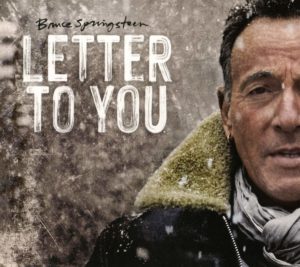 Bruce Springsteen, the very guy who wrote “Glory Days” about folk who spend their adult years looking back to the time when they were in their prime and their star shone brightest, should probably have seen this time in his life and career coming. Maybe it’s a little bit easier to spot nostalgia in a former high school athlete who’s winning days are long past, than it is when you’re at the point in your musical career where you’ve written your memoirs in a best-selling book, then spent 7 months in 2016 touring your classic 36 year old double album, The River, only to come off the road to perform a sold out one-man Broadway show.

Of course, as you get older (Bruce is 71) you are probably going to more funerals than weddings and you start reflecting on all that has happened to get you to the place you are in life. So, if you’re going to look back and wax nostalgic it doesn’t hurt if you can write a decent song, have the language skills to say something interesting, relevant and honest, and then it’s a real plus if you have a band as good as the E Streeters on speed dial.

Springsteen’s last album with the E Streeters was High Hopes in 2014, comprised largely of covers and revisited outtakes from previous projects, making the last album of original material recorded with his own band Working on a Dream in ’09. Last year, of course, Springsteen released Western Stars, which found the artist paying tribute to the early influence of 70’s era California pop, made popular by Glen Campbell (“Wichita Lineman”) and Burt Bacharach.

The advance press on Letter to You, suggests that the 9 new songs here arrived after a period of writer’s block, when Springsteen received the gift of a guitar from a fan. Springsteen has acknowledged that some of the inspiration here came from the recent passing of one of his earliest bandmates, George Theiss of his first real band, The Castiles. Thinking back on the three formative years in that group has Springsteen reflecting on the families that the best bands often become, the music they can make together—the power and meaning that music can have in one’s life—and no doubt the passing of E Streeters Clarence Clemons & Danny Federici, then realizing that all the rest of the members in The Castiles have now died leaving Bruce the “Last Man Standing.”

In this album’s opening reflective ballad, Springsteen focuses on the fragile impermanence of our lives, the fact that “One Minute You’re Here,” but “the next minute you’re gone.” Some might despair in the face of that awesome reality, but Springsteen has chosen, as he often has in his long career, to face that eventual dying of the light by gathering his band together to shine in their own unique and powerful way. And it doesn’t hurt that he finds a poetic way to include the recollection of a colorful childhood memory of placing a penny on the railroad track so that it’s flattened by a passing train. This is not denial or surrender, it’s finding beauty life’s moments, where they can be found. Springsteen chooses one more time to take “all my fears and doubts… the hard things I found out… all that I found to be true and send it in a letter to you,” albeit in a lovely pop song form.

While it’s nearly inevitable that Springsteen’s songs become the focus of any new project, on “Letter to You” the emphasis more than any record he’s made since 2000 settles squarely on the sound of this band, his very own long-time bandmates and friends. Throughout his career, Springsteen has from time to time stepped away from his E Street crew, whether it was to look inward and explore his acoustic side on Nebraska, The Ghost of Tom Joad, and Devils & Dust, dig into his Celtic and folk singer roots on We Shall Overcome: The Seeger Sessions, or record with some of the best session players available. But as he did for his three biggest tours of this last decade, the Wrecking Ball, High Hopes, and The River world tours, Springsteen always returns to The E Street Band.

This time, for this record, perhaps for the first time since Born in the U.S.A., Bruce has embraced that big, classic E Street sound that marked his earliest and best-selling albums, from the explosive battery of Max Weinberg’s fills and propulsive driving drum beat, those soulful sax runs where Jake Clemons honors the memory of his uncle, the Big Man Clarence, the piano interludes of Roy Bittan and the Hammond organ and glockenspiel bells where Charles Giordano does his best to conger the memory of the late Danny Federici, and both Stevie Van Zandt and Nils Lofgren add their guitars to Bruce’s, while Garry Tallent’s melodic bass lines somehow hold all of them together in that singular groove.

For the first time in a long, long time, Springsteen and the E Street veterans and friends came together to record live in Bruce’s intimate home studio and recorded the 12 tracks of Letter to You in just 5 days. And the experience was captured in a documentary film that debuted on Apple TV on Friday, the same day the album came available for sale.

“Ghosts,” the album’s second video/single, finds Springsteen and his E Street comrades pulling out all the stops, embracing all the musical cliches that made the band’s sound work so well all the way back in the 70’s. From the hand claps and the “la, la, la, la, la’s” of the sing-along chorus, they are all the more welcome here. Springsteen’s lyrics face the reality of death by celebrating everything about making music from “the sound of your guitar,” followed by an appropriate array of power chords. He recalls those “old Fender twin” amps, as “I shoulder your Les Paul and finger the fretboard/I make vows to those who’ve come before/I turn up the volume, let the spirits be my guide/Meet you brother and sister on the other side… I’m alive and I’m coming home.” Like a warm blanket of sound, home rarely felt so good.

Given the backward-looking vibe of Springsteen’s new songs, it’s a fun addition that 3 songs here date back to his earliest days as a songwriter, recorded as demos but discarded before Springsteen’s 1973 debut, “Greetings from Asbury Park.” Way back when, Springsteen was one of the strongest contenders in the media’s search for the “New Bob Dylan,” which seems even sillier these days since Dylan is still working at the very top of his creative abilities (Rough & Rowdy Ways) even in his late 70’s. Learning that “Song For Orphans,” rich in Dylan’s influence from the harmonica to the elegant lyricism of lines like “to every gypsy mystic hero that the kids might find a place/who get lost forever to mom and pop on their weekends out in space,” makes it all the more fun. Likewise, “Janey Needs a Shooter” has a strong instrumental vibe rooted in the sound of The Band, while “If I Was the Priest” finds Springsteen’s singing lines that ring out with an appreciation for Dylan’s phrasing, while spiritual metaphors from his Catholic upbringing mix with imagery from the old west.

That initial spiritual inclination has remained throughout Springsteen’s career, demonstrated most clearly with him repeating the “Lord’s Prayer” at the end of his Broadway show. Here, Springsteen equates music’s ability to bring people together with “The Power of Prayer,” and finds expression in his assertion that “death is not the end” in “I’ll See You in My Dreams,” two of the album’s better pop leaning tracks. “Burnin’ Train,” driven especially hard by Weinberg’s unrelenting beat, is a riveting rocker where the guitars shine, while “Rainmaker” provides the album’s only obvious comment on the politics of our current moment in time, recalling the classic tale of gaslighting, and one who “says white’s black and black’s white… sometimes folks need to believe in something so bad, so bad, so bad.”

All in all the album rings true, honoring the feel and power of music, the importance of real connections in life, the people and things that sustain and hold us together. Given that focus, it’s easy to see the appeal of even the lesser effort that is “House of a Thousand Guitars.” I mean that title, right?

Like many of Springsteen’s fans, the singer/songwriter has begun to look back with appreciation on all that’s gone before, and in wide swaths of the familiar sounds embrace the ringing guitars, pianos, saxes and organs, driving drums and the vocal harmonies of ringing choruses that recalls all that has long been great about this band, which for nearly 5 decades has given Bruce’s unique voice wings. With Letter to You, Bruce Springsteen and the E Street Band ride again, and one day soon we dare to hope they’ll bring this celebration of music and life to a venue nearby. Until then, many of these songs will serve as warm reminders to live each day fully and well.