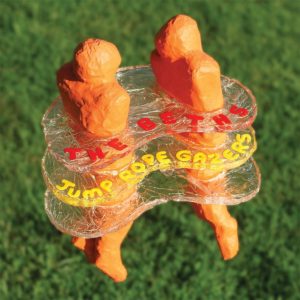 The debut of NZ band The Beths, Future Me Hates Me, was one of the musical bright spots of 2018, making it onto a lot of music critics’ ‘best of’ lists. We hear a continuation of the band’s bright power pop, and the smart songwriting by lead vocalist Elizabeth Stokes, along with the supportive vocal harmonies and punchy guitar rock of her bandmates, on this fine sophomore follow-up. Like last time, where the big, bolder power pop tracks like “Great No One” and “Uptown Girl” drew in listeners only to find that Stokes & Co. have a broader sonic palette and deeper emotional depth than you usually find in fast, catchy rockers, Jump Rope Gazers continues to exhibit that ability to surprise and delight.

The disc opens with the one-two punch of “I’m Not Getting Excited” and “Dying to Believe,” emphasizing this band’s strengths, from Stokes catchy melody to guitarist/producer Jonathon Pearce’s expressive guitar tones, whether grinding out a crunchy rhythm sound or elevating a soaring solo from a sigh to a scream, and the kinetic energy and chemistry of drummer Tristan Deck and bassist Benjamin Sinclair which breathes life into the structural supports that underly Stokes’ rhythm playing. The catchy sing-along goodness of the first one may have you thinking of the best work of class acts like Liz Phair or Julianna Hatfield, by the time the crunchy guitars fall out in the second track, as Sinclair and Deck drive home the energy of that souped-up bass and drum rhythm and Stokes starts singing over it, you begin to think she may be beyond the stage where comparisons are helpful.

On the title track, we get a broader sense of this band’s potential, while Stokes pours her heart out into one of many break-up love songs, the band manages to match her song’s inner angst with just the right amount of vocal harmony and musical muscle. “Acrid” returns to a punchy pop hook, but the lyrics continue to carry the weight of Stokes’ inner turmoil, as she sings “Like a record slowly twisting/like an arrow always missing/I’m always whistling by/But it’s you I want to run into,” the guitars and vocal harmonies hit the mark even though the relationship doesn’t. Whether begging her love to stay (“Don’t Go Away”), promising to wait (“Out of Sight”) while acknowledging that waiting is hard (“Do You Want Me Now”), or finally telling the guy to “just go to hell” (Mars, The God of War”), Stokes manages to write artful singer/songwriter alt-rock that gives Pearce plenty to work with, both as a guitarist and producer, where he appears to excel on both counts.

Generally, introspective singer/songwriters have a hard time finding the right emotional balance when working in a band context, because as Stokes writes, nuance can make a person “kind of a bummer.” Here again, The Beths elevate themselves to the best examples of female singers who have found that artful balance between nuanced expression and rocking hard, putting Stokes & Co. in the company of Chrissie Hynde & her Pretenders, and another from down under, Courtney Barnett. For all the introspection in Stokes’ lyrics, not only does the band rock, but she manages to deal with the darker feelings while still being, as she sings to another in the folk rocky penultimate track of 10, “You Are a Beam of Light.” While her songs ripple with uncertainty and indecision, as the closing track admits, she’s “Just Shy of Sure,” but guitar pop fans won’t be. The Beths bring it.