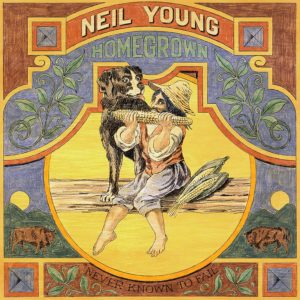 This long “lost” Neil Young album was recorded late in 1974, two years after his classic solo, commercial breakout album, Harvest, which contained some of Young’s best known and loved songs – “Heart of Gold,” “Are You Ready for the Country,” “Old Man,” “Alabama,” and “The Needle and the Damage Done.” Somewhat overwhelmed by his new found success, and rocked by the OD death of his friend and Crazy Horse guitarist Danny Whitten, in ’73 Young recorded the dark, loose and grieving album, Tonight’s The Night, which his record company found so distasteful that they held it for two years and only released it under pressure from Young. In the Spring of ’74, he recorded and released the similarly brooding On the Beach, but it was a commercial failure, the Young re-grouped with Crosby, Stills & Nash for a summer stadium tour, with talk of another CSN&Y album in the next year, which of course didn’t come to pass for more than a decade.

While Young may have been struggling due to the passing of Whitten and his friend and roadie, Bruce Berry, and uncertain about how to deal with his new found solo success, together with being in one of the decades greatest supergroups, he was also busy writing and recording music. In ’75 he would reunite with Crazy Horse to record and release, Zuma. But late in ’74 and the early weeks of the new year, Young made Homegrown, a 12-song work recorded shortly after the break-up with his girlfriend, Carrie Snodgrass. He finished it, but soon abandoned it because it felt too personal and painful to share. Few veteran artists of Neil Young’s success and vintage have been as productive, and few have besides he and Bob Dylan have been so willing to go back into their archives to find old recordings and release them to their fans, like Live at the Cellar Door, recorded in 1970 but not released until 2013, and Hitchhiker, a live solo acoustic album recorded in Hawaii in 1976, first released in 2017. Currently, Young has reportedly posted everything from his entire catalogue to be streamed in high resolution audio, at www.neilyoungarchives.com.

Musically, Young has described Homegrown as the “unheard bridge between Harvest and Comes A Time,” two of his recognized classics as well as most commercially successful efforts. As suggested, “Separate Ways” and “Try” open the album, which finding Young working hard to recover from his lost love, “who made the world go round,” while hoping that she will return to work it out. The first his Young in strong folk singer form, supported by The Band’s Levon Helm’s unrelenting drum beat, and the weeping tones of Ben Keith’s steel guitar. The second slows down and leans further into country, with Young on piano and Emmylou Harris joining him on his end of chorus “oohs.” These two unheard until now, tap Young’s vitality as a songwriter in more polished ways.

Several things here, recorded for the first time, later showed up in other versions on other albums, most memorable being “Love Is a Rose,” which serves up a bit of corny romance the way only Neil Young can. “Little Wing” and “Star of Bethlehem,” which close out the album with largely acoustic renderings both got released on later Crazy Horse albums, but sound better here. Two songs that reveal the still youthful Young’s romance with marijuana are the goofy title track, and the sloppy, slippery blues jam that has Young working his harmonica, “We Don’t Smoke It No More.” They are pleasant enough, light-hearted romps, that are far more welcome than the weird spoken word piece, “Florida,” with starts to tell a story be keeps drifting off on tangents like a conversation you might have with the stoned guy at a party, when he’s standing between you and the door.

Far more welcome is “White Line,” an acoustic rendering with Neil on guitar, harmonica and singing the lyric, while joined with The Band’s Robbie Robertson playing along, playing tasty fills between Young’s vocals. Young did a later version of this with Crazy Horse, but this one is very special, as it’s a treat to hear these two together, both at the top of their game. The album’s one rocker, “Vacancy,” sounds like something that Young could have done on that potential CSN&Y album, with lots of room for their vocal harmonies amid Neil’s churning rhythm guitars, harmonica and electric solo licks. As far as I can tell, along the two opening numbers, these two, “Love is a Rose” and the two at the end, set Homegrown up as a very vital part of that particularly eventful period in Young’s career, insuring this will be a must for his fans. Neil, of course, is still going strong into his 70’s, releasing another fine collection of rockers with Crazy Horse just last year, with Colorado, and he was promising to hit the road this summer with Nils Lofgren in his touring band, before COVID-19 changed all our lives. No doubt, he’s got more in store for us.