Three rich, rounded and nuanced performances bring to life a beautiful elegy about love, loss and yearning. The trio of women – in their 20s, 40s and 60s – live in Shetland (an archipelago in the Northern Isles of Scotland).

The youngest is Sylvia (Liza Meagher), who married her childhood sweetheart Paul in what was meant to be a case of happily ever after. Only the untimely death of Paul’s best mate proved to be a circuit breaker. Paul is desperate to have children and blames Sylvia for being barren, when that couldn’t be further from the truth. He is a changed man. He is in denial … and then Sylvia finds God.

Marie (Gabriella Rose-Carter) is a deeply unsettled soul who works as head of a local council in Edinburgh, but is drawn back to Shetland. Her marriage to Alan doesn’t satisfy her and never has. She never wanted children and they don’t have any. At one point she took up a relationship with another woman. Marie’s mother worked hard to provide for the family and then up and left at the age of 64. Marie greatly admires what her mum did and would dearly like to be that free spirit herself, only she can’t bring herself to cut ties.

Edith (Suzanne Heywood) – the eldest – and her husband Bobbyare married and have two children, son Zander and daughter Claire. Edith had her heart set on four kids, but it was not to be. Zander has been the love of her life and Edith really appreciated him when he was a youngster and totally dependent upon her. Only he grew up and spread his wings, which left Edith heartbroken. His choices haven’t always pleased her and now he has a dead-end job. Then tragedy strikes.

Zander’s Boat is a complex, caring and considered work by Grace Barnes. It is a play about isolation – not just the physical isolation of Shetland but the emotional burden experienced by each of the triumvirate. Barnes was interested in the effect of Shetland’s overtly masculine culture on women and anyone out of step with the prevailing attitudes towards gender. She wanted to explore attitudes towards motherhood and different experiences mothers can have, challenging the view that women are “natural” carers. The piece also calls into question whether motherhood is a natural state for women and a universally positive experience.

Zander’s Boat starts with the three extolling the virtues of storytelling in Shetland, including tales of seals that can shed their skin and take on human form. Their driving force remains a return to the sea. They speak of a special boy with a special boat – a magical one. Then the play opens up to reveal the women’s personal stories.

Each is dressed in white and the action takes place on a beach and wooden boardwalk on either side. The simple set design by William Atkinson – consisting of slats and an attractive sand pit upon which is strewn driftwood, boards and a bucket of sand containing coloured glass – works most effectively. It creates the necessary mood for reflection. The soundscape by Finn McBurney – which includes waves and children giggling –adds atmosphere and authenticity. 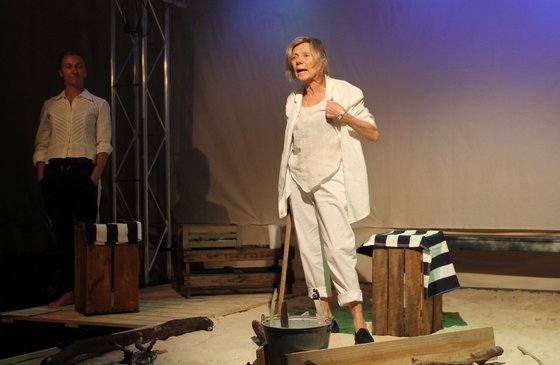 I was taken by all the women’s stories, but particularly attracted to the performance by Liza Meagher as Sylvia. Her idyll is crushed but she manages to rebuild herself in spite of her pain. Suzanne Heywood conveys Edith’s fraught underbelly, with her anger and heartache internalised as much as her pronouncements initially appear to be venting at Zander. Opinionated and strong willed, for all her pretense of knowing her mind, Gabriella Rose-Carter gives Marie an indecisive flavour. That hesitancy to act has held her back.

Direction from Suzanne Heywood is tight and assured. Zander’s Boat moves along at a cracking pace as the tales and experiences quickly mount. Eighty minutes without interval, it is a fine piece of work from Q44, which is playing at Abbotsford Convent until 3rd November, 2019.