Yank was a weekly magazine published by the United States military for its servicemen from 1942 – 1945. It’s the magazine where an awkward young man called Stu (Andy Johnston) partners with photographer Artie (Eli Cooper), who is also ‘light in the loafers’, to report stories.

After Stu’s call-up, before he goes off to join his squad in basic training, his mother (Naomi Price) gives him a journal to record his time in the service. It is this journal that a modern San Francisco man finds at the outset of Yank, a World War II Love Story (music by Joseph Zellnik, book and lyrics by David Zellnik). The journal’s discoverer doesn’t know much beyond Stu’s entry into the military with feel that he doesn’t fit in. And so we are transported back to young protagonist Stu’s story and his acceptance of being a gay man at a time where being gay was a crime, which initially comes through his relationship with all-American Mitch (Alex Gibson-Giorgio). Unfortunately, however, the two are separated by Stu’s secondment to Yank, where he flourishes under the flamboyant Artie’s life mentorship. 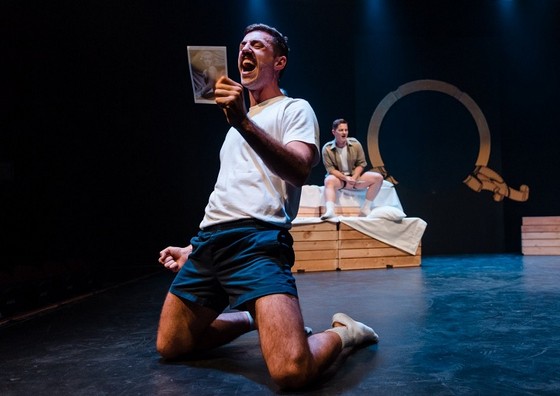 The ensuing love story explores what it means to fall in love and struggle to survive, in a time and place where the odds are stacked against you. And under Director Ian Good’s stewardship, it is a moving account. There are some truly tender moments between the raw recruit and closed-off Mitch, dubbed by all as ‘Hollywood’ due to his essential likeability.

Gibson-Giorgio is mesmerising as Mitch, even when a broken man or struggling with his demons, and his rich vocals make the beautiful “A Couple of Guys” a resonating expression of the men’s dream of life in a ‘house of perfect size for a couple of regular guys’, even if only in their imaginations. Johnston takes audiences on an authentic emotional journey from coy almost-19-year-old around the older and more assured Mitch, to self-secure survivor. And like Gibson-Giorgio, his voice is glorious.

There is no weak link in the cast. Distinct characters within the squad are brought to vivid life but not overplayed to caricature territory. And their lively “Your Squad is Your Squad” (like peas in a pod) is a memorable punch of vigor, full of playful personality. Naomi Price is memorable, not just as the only female of the cast, but through her musical transport of audience members to the 1940s, in catchy love songs like the jumping “Saddest Gal What Am” and gorgeous ballad “Remembering You”. Indeed, she not only looks that part thanks to Elizabeth Ball’s on-point costume design, but her voice is era-evocative in each distinct number.

The lavish swinging score features of-era song stylings of all sorts, and mention must be made of the show’s band (under the musical direction of Trevor Jones), which is spot-on in provision of perfect 1940s sounds to accompany the bright harmonies. The show’s lively early titular number about the service man’s journal is a standout, gripping the audience from the outset and setting high expectations that are fully realised. But the varied score also allows for a well-curated ebb and flow of energy; a crooning “Betty” about the boys’ fascination with pin-up girls like Betty Grable (whose bathing suit image made her the number-one pin-up girl of World War II) slows things down ahead of the spirited “Click” tap duet, where photojournalist Artie educates Stu in how to recognise and hook up with other gay soldiers, which is an explosion of wonderful skill and physical charisma.

Simple but versatile staging sees a collection of wooden crates used to create a range of settings from bunk beds in the barracks to their shower stalls and the bar in which Stu first meets Artie. And choreography impressively makes the most of the intimate Visy Theatre, especially in ‘light on their feet’ dance numbers like “Credit to the Uniform”. 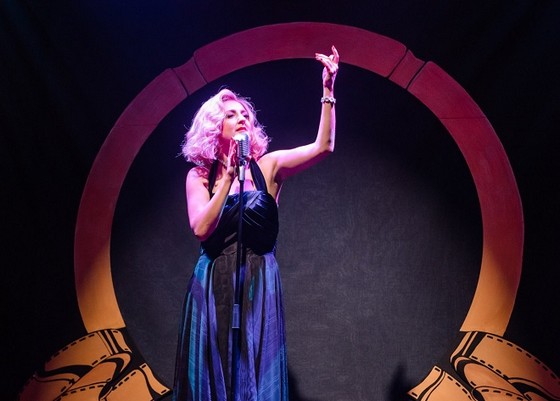 By Act Two the soldiers are being sent to the front line, but that is not the tale’s only trauma as the story takes a more serious look at the consequences of the characters’ actions and the harsh realities of being outed as being gay in the army at that time (inspired by Allan Bérubé’s book of oral histories Coming Out Under Fire, the musical is based on the true hidden history of gay soldiers during World War II).

As things travel towards the story’s moving conclusion, we are both touched and inspired by its commentary about the legacy of brave acts of survival, knowing that Understudy Productions has certainly done justice to the Australian premiere of the work with a credible but not cliché realisation. Yank is a compelling story, emotional in and of itself, without need to be overtly positioned as a political commentary and in this regard particularly, the company should be commended. This Yank is a human story, but still an important one that needs to be told to avoid a repeat. This audience-self-realisation is integral to its success.

Yank is playing at the Brisbane Powerhouse until 14 July 2019.