The X-Men aren’t my favourite superhero franchise; but I’ve been happy to check in with them over the years. The original “tranche” (X-Men [2000]  through X-Men: The Last Stand [2006]) and their spin-offs were pretty good, though Hugh Jackman as Wolverine was always the best thing about them. In 2011, the “throwback” series kicked off with X-Men: First Class. X-Men: Dark Phoneix fits into that time-line; though I have to say I left the cinema feeling completely confused.

This is basically Jean Grey’s origin story. That story though – like the movie – is a mile wide and an inch deep. It goes back – as many superhero stories do – to childhood trauma. But once the film exposes the roots of that trauma (about a third of the way through), it has few places left to go. So the third act becomes a mostly empty CGI battle sequence. And it’s almost relentlessly sombre, which doesn’t help. But on the plus side, Dark Phoenix introduces one of the most bonkers mutants in the whole bonkers X-Men universe – a guy with deadly (as in lethal, not cool) dreadlocks. 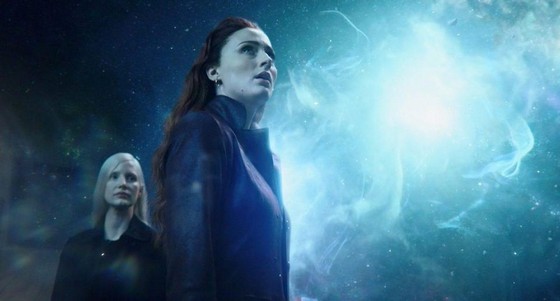 We start with a (blatantly telegraphed) car crash that leaves young Jean Grey (played by Summer Fontana as an 8-year-old) an orphan. Prof Charles Xavier (James McAvoy) takes the “special” child into his school for gifted youngsters. Years later, in 1992, Jean (now played by Sophie Turner) joins fellow X-Men Beast (Nicholas Hoult), Raven (Jennifer Lawrence) and Cyclops (Tye Sheridan) – who’s also her boyfriend – on a dangerous mission to rescue the crew of a space shuttle that’s run into an unknown force. At the height of the struggle to save the crew, Jean absorbs the “cosmic force” causing the drama. She’s transformed, though she doesn’t know quite how. Meanwhile, an alien craft lands on Earth. Fearsome leader of the aliens, Vuk (Jessica Chastain) takes on human form and links up with other aliens living on Earth to carry out a long-gestating plan.

At its core, writer-director Simon Kinberg’s script is simplicity itself. But he makes things very complicated with plot twists. If you think these twists are kind of familiar, you’re right – because they’re basically the same as those in the recent Avengers movies. That’s unfortunate, given they’re both part of the Marvel-Disney stable. And they may point to how the future of the franchise* will play out. But X-Men fans shouldn’t worry. The movie goes out of its way to assure us the franchise will continue for a while yet.

I also found it a little hypocritical that the trailer seems to talk up the film’s feminist credentials; but the film itself largely concentrates on the men, particularly Prof Xavier and Magneto (Michael Fassbender).

Sophie Turner (Game of Thrones) gets a more substantial run at the Jean Grey character after a smaller role in X-Men: Apocalypse. She certainly holds her own in the role, though the script demands she spend a lot of time floating around and exuding CGI energy. James McAvoy and Michael Fassbender renew their characters with typical aplomb. Tye Sheridan doesn’t quite have the swagger required for the rather irksome Cyclops; but Nicholas Hoult has some nice moments as the thoughtful Beast. Jennifer Lawrence gets limited opportunities as Raven; but Jessica Chastain isn’t served at all well by a character that requires her to stare blankly most of the time.

While X-Men: Dark Phoenix was better than I feared, it wasn’t as good as I hoped. In the scheme of X-Men movies, this is more filler than killer. It’s one of those “transition” movies that are sometimes necessary in a long-running franchise; but not essential viewing for any but devoted fans.

*X-Men: The New Mutants is scheduled for next year