Worst Little Warehouse is a funny, risqué and frenzied ode to housemates.

Based on a true story, the cabaret’s inspiration was what happened to real-life couple – writer/performers Lala Barlow and Robbie Smith – while living in a converted warehouse in North London. Struggling with exorbitant rents and the city’s ongoing housing crisis, the pair lived in close quarters with 10 others for 12 months, unearthing so many tales that were too good not to share.

Barlow and Smith play a dozen different characters between them whilst accompanying themselves on a keyboard, which takes centre stage. 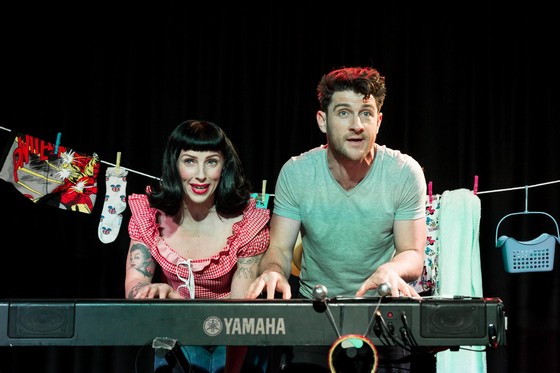 Musically, you’ll find many of the tunes are familiar, but the words are their own. We get to know the personalities they endured during their warehouse year … and let’s just say what they found wasn’t always pretty.

Barlow and Smith – equally adept on their shared instrument – elicit laughs aplenty for the full hour that the production runs.

If non-stop, fast-paced banter appeals then head to the MC Showroom in Prahran. Directed by Sarah Redmond, The Worst Little Warehouse In London is a celebration of the joys of share housing and the people you meet along the way. Barlow and Smith workshopped it in London’s West End before bringing it to their hometown of Melbourne, where it is only playing until 24th June, 2018.

Next the couple heads to Edinburgh to present this show at the Fringe Festival there.