Into the World by Stephanie Parkyn is historical fiction that’s both rich in fiction and character, delivering a memorable story of a woman named Marie-Louise, who dresses as a man and finds herself on a dangerous expedition around the world. 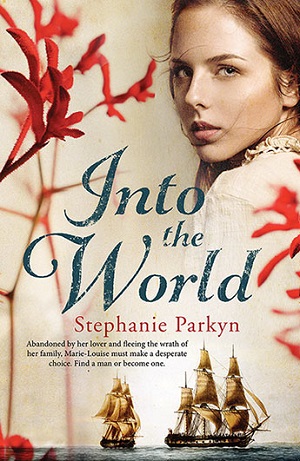 1791. In the midst of the French Revolution, unwed mother Marie-Louise Girardin takes one last look at her baby son before entrusting him to her friend, the revolutionary Olympe de Gouges. She must escape, and only the most daring plan will bring her both the anonymity she needs and the independence to return one day for her son.

Marie-Louise disguises herself as a man and joins a voyage of exploration employed as a steward on the Recherche, one of two ships commissioned to journey to the Great Southern Ocean to find the missing explorer La Perouse.

Protecting her identity throughout, Marie-Louise forms friendships among the eccentric naturalists. But tensions rise between the royalist officers and the revolutionaries, and Marie-Louise’s position becomes precarious when she discovers someone on board knows the secrets of her past. When the expedition docks in Java, chaos erupts as they learn of King Louis XVI’s execution and are imprisoned by the Dutch. Marie-Louise seems certain to be unmasked. Will she ever return to France and be reunited with her child?

I was swept away by the suspenseful storytelling as Marie-Louise battles not only the sea, but her self-confidence and self-respect, the attentions of suspicious sailors, and heart-sickness at leaving behind her child. Parkyn deftly builds in themes of loss and discovery, of rebellion and betrayal, of love and duty, delivering a tale that lingers.

Into the World is now available, published by Allen & Unwin.