The Winter’s Tale: a fitting production to put on in this mild weather, it would seem. This is one work by Shakespeare I hadn’t seen before and am now quite happy to add it to my memory’s library. The play was performed by the Queensland Shakespeare Ensemble and directed by Michelle Miall. This tight knit troupe of actors has delivered again.

I won’t be the first to say that this work by the Bard is as popular as some of his others, however this to me, lends it a special and overall rare feeling. This feeling is reproduced in its words with Shakespeare crafting a complex story with maturity and wisdom. 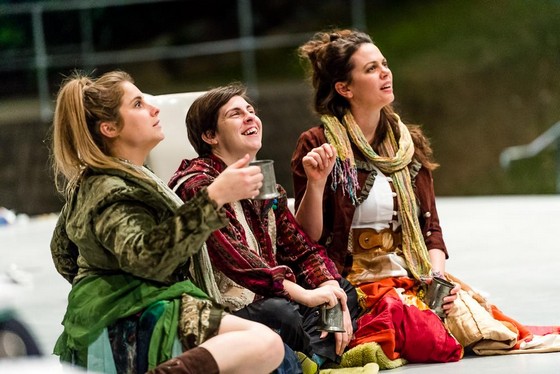 This play is one of his later works and is different from his other, perhaps more serious and sombre, tragedies, or dramas.

Miall notes this by saying it “transforms” at the end and departs from a dark and lugubrious finale to a light-hearted and celebratory one. To be honest I thoroughly enjoyed watching the story unfold and my total unfamiliarity with its plot made it exciting.

The acting style of the troupe was as it is always: high in energy, entertaining and insightful. The show is long, clocking in at three hours with interval, but the actors did not relent and slow down or show how tired they might be, and their energy hardly faltered.

QSE’s delivery of the Bard’s words are saturated in knowledge and confidence in what they know and how they say it. This transfers to the audience to create a mutual understanding. They also add little facial expressions as asides or aides depending on what is necessary.

I found that useful, being not as fluent in my Shakespeare as I once was. It also provides depth and humour to take away at the end of the show, with memorable moments lingering on.

When actors wear many proverbial hats and are employed in different roles within the one production, I sometimes find it confusing. Not so with QSE. Each costume is markedly distinctive and each role acted differently that I found it easy to believe I was seeing more actors than there are in reality. 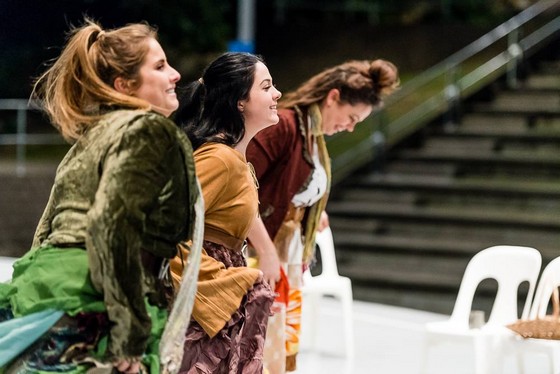 The Winter’s Tale is an intense one – full of jealousy, familial destruction, filial piety and resurrection . From the very first scene the audience is greeted with a King mad in his state of distrust. This eloquent anger is gradually abated through the play as time passes and moves to joy, love and mirth. This made the play a veritable roller-coaster ride. There are always strong performances by QSE. This time I was captivated by Paige Poulier’s Hermione, whose soft and kind nature is initially met with disaster. And of course, Rob Pensalfini always provides a good spectacle to admire. His Leontes was maddening.

Overall I greatly enjoyed this production of The Winter’s Tale, the backdrop of the Roma Street Parklands is as charming as ever with curlews adding an apt atmosphere with their wailing voices. QSE’s casting choices were on point which make their hard work, it seems, pay off once again.