Gritty and unrelenting, Wind River marks the directorial debut of Taylor Sheridan. He’s the screenwriter behind Sicario and Hell or High Water; and here he weaves a tense thriller. Wind River is Sheridan’s conclusion to a thematic trilogy (with those earlier films) exploring the modern American frontier. 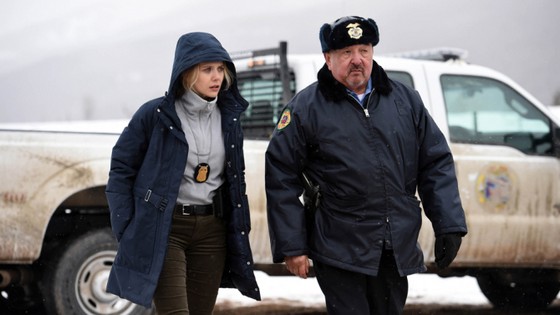 The film explores what Sheridan calls “perhaps the most tangible remnant of America’s frontier and America’s greatest failure” – the Native American reservation. It is truly a brutal place. It’s where the landscape is an antagonist. It’s where addiction and murder kill more than cancer. And rape is considered a rite of passage for girls on the cusp of womanhood.

Jeremy Renner plays Cory Lambert, a local game tracker who stumbles on the body of a murdered teenage girl, Natalie (Kelsey Asbille). He finds her frozen in the desolate wilderness of the Wind River Indian Reservation. Still trying to come to terms with the death of his own teenage daughter, Cory is forced to confront his past. Rookie FBI agent Jane Banner (Elizabeth Olsen) is assigned to the case. Out of her depth, she enlists Cory’s help to navigate the unfamiliar terrain and unforgiving conditions. The pair ventures deep into a world ravaged by violence and the elements.

Wind River presents a stark look at life on the edge of an imposing wilderness. The laws of nature eclipse the rule of law in this world. It’s a film with several threads running through it that take some time to unravel. There’s a lot going on here, bubbling below the surface. A fine writer, Sheridan knows how to weave intelligent, thought-provoking stories.

I found some of the language difficult to understand, even though it’s an English-language film. Not all words spoken are clear. Still, that doesn’t detract from the dark tenor of the piece. Sheridan’s sparse use of dialogue and haunting music by Nick Cave and Warren Ellis resonate.

Renner’s taciturn performance is a standout, while Elizabeth Olsen also impresses. The pair make for an unlikely team of investigators.  Cinematographer Ben Richardson (The Fault in Our Stars) expertly captures the harsh landscape. It could have been given a character credit in its own right, such is its impact on the story.

While Wind River could perhaps have been edited down, it remains a tense insight into an unfamiliar land. Rated MA, it scores a 7 to 7½ out of 10.