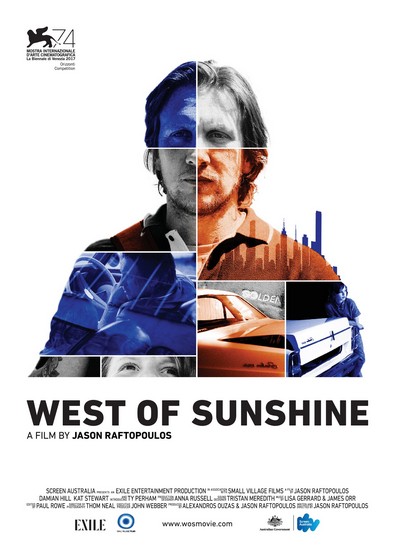 We have 5 double in-season passes thanks to Exile Entertainment.

WEST OF SUNSHINE tells the story of Jim (Damian Hill), trapped in a perpetual cycle of gambling and debt, as he desperately attempts to repay a violent loan shark (Tony Nikolakopoulos). Unfolding over the course of a day, Jim must pay back his debt by any means necessary, all while being forced to watch his son (Ty Perham, Hill’s real-life stepson).

Receiving a five-minute standing ovation at Venice Film Festival and described by Variety as a “sharp and rewarding feature debut,” WEST OF SUNSHINE will be released in Australian cinemas on August
23rd.

West of Sunshine star Damian Hill is a stalwart of Australian filmmaking. While he has featured in gritty roles, in 2016 he starred with Xavier Samuel and Rachel Ward in what whimsical Aussie film directed by Cris Jones?