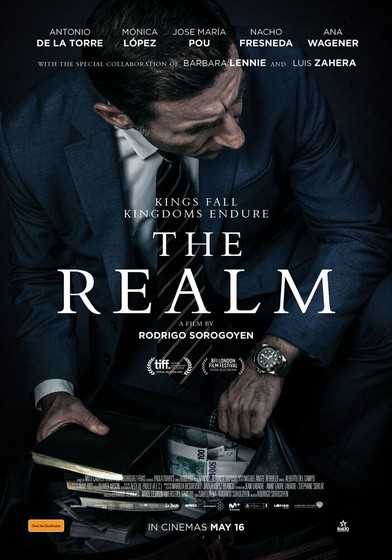 *(Tickets valid in Australia only)*
Watch the trailer HERE
Acting heavyweight Antonio De la Torre reunites with director Rodrigo Sorogoyen to give another compelling performance in this unmissable hit political thriller which was presented every major award at ceremonies across Spain, including the Goyas, Feroz and Cinema Writers Circle.
Driven, motor-mouthed and smug, Manuel Lopez-Vidal (de la Torre) is a Spanish politician whose high-class lifestyle is based on enabling policies that include high-level government corruption. His calculating facilitation of illegal activities has steadily boosted him up the ladder and provided a very comfortable lifestyle for himself, his devoted spouse and their teen daughter. When, on the verge of his huge promotion, a leaked tape exposes Manuel’s dealings to the public eye, he meets the cruel underbelly of his own system. The event reveals to him a larger realm of those even guiltier, not to mention more cold-blooded, than he, and radically shifts Manuel’s role from facilitator to whistle-blower. What follows is a tale that overflows with intrigue and suspense, before culminating with a confrontational end to this surprising, serpentine tale.

For your chance to win, enter your details below and type “The Realm” in the answer box.