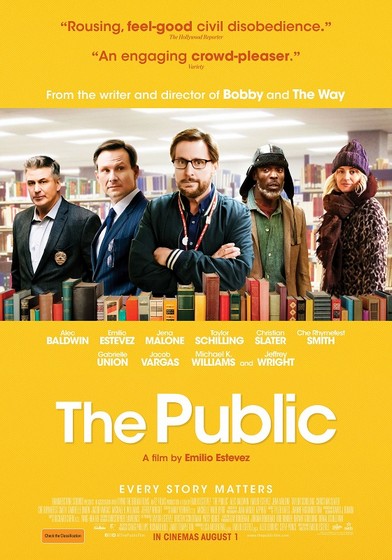 We have 15 double in-season passes thanks to Rialto Distribution.

An unusually bitter Arctic blast has made its way to downtown Cincinnati and librarians Stuart Goodson (Emilio Estevez) and Myra (Jena Malone) see their regular winters day shaken up when homeless patrons decide to take shelter in their library. At odds with library officials over how to handle the extreme weather event, some homeless patrons turn the building into a shelter for the night by staging an “Occupy” sit in. What starts as a peaceful sit-in quickly escalates into a face-off with the police and the media who are constantly speculating about what’s really happening.

The cast of The Public includes several big names. One of those is Christian Slater, who recently appeared alongside Glenn Close and Jonathan Pryce in which Oscar-nominated film?