– The House with a Clock in its Walls – 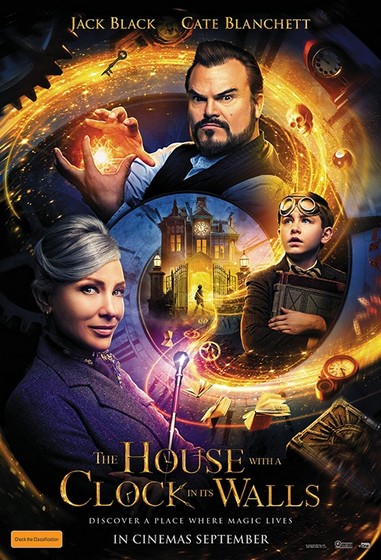 In the tradition of Amblin classics where fantastical events occur in the most unexpected places, Jack Black and Cate Blanchett star in The House with a Clock in Its Walls. A film for the whole family, this magical adventure tells the tale of 10-year-old Lewis, an orphan who is sent to live with his Uncle Jonathan in a creaky old house. But his new home is far from ordinary and soon reveals a secret world of warlocks and witches. The house is enchanted, and Lewis must join his uncle on a quest to discover the source of a mysterious ticking within its walls.

Based on the beloved children’s classic written by John Bellairs and illustrated by Edward Gorey, The House with a Clock in Its Walls is directed by Eli Roth and written by Eric Kripke (creator of TV’s Supernatural).

The House with a Clock in Its Walls of course stars our own Cate Blanchett. She was recently seen in another fantasy movie of sorts, which featured fellow Aussie Chris Hemsworth and was directed by New Zealander Taika Waititi. What was that 2017 movie?