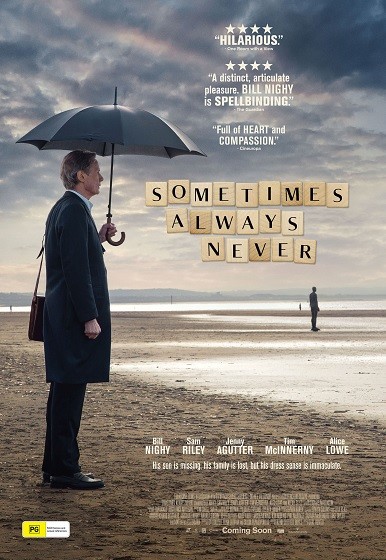 Sharp of both suit and vocabulary, Bill Nighy (Love Actually, About Time, The Best Exotic Marigold Hotel), is winningly deadpan as Scrabble-obsessed Merseyside tailor Alan, whose eldest son Michael stormed out of the house after a particularly heated round of the popular board game, never to return. Years later, Alan and his other son Peter (Sam Riley, Maleficent) continue the search while trying to repair their own strained relationship. Working from a witty and astute script by veteran screenwriter Frank Cottrell-Boyce (The Railway Man, Goodbye Christopher Robin), Liverpudlian director Carl Hunter deploys a vivid visual style and striking production design to capture the shifting moods of a family who know plenty of words but struggle to communicate. A triple score-worthy supporting cast includes Jenny Agutter and Tim McInnerny.

Sometimes Always Never star Bill Nighy seems to pop up in many a British movie. For instance, he appeared opposite Emily Mortimer and Patricia Clarkson in which film directed by Isabel Coixet made in 2017 but released in Australia in 2018?