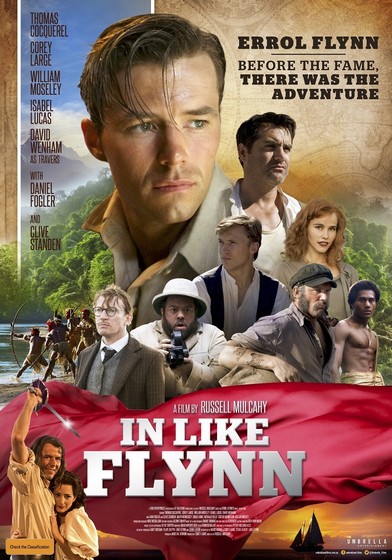 IN LIKE FLYNN transports audiences to 1930, before Errol Flynn became a legendary matinee idol of Hollywood’s Golden Age. Whilst serving as a guide for a Hollywood producer in the jungles of Papua New Guinea, young Flynn (Thomas Cocquerel) discovers a trail that will lead to a fortune in gold. Back in Depression-era Sydney, he recruits a motley group of fellow opportunists with whom he sets sail in a yacht stolen from Chinese opium smugglers. What follows is a mythical and satirical coming-of-age story about four men on a journey to find hope, adventure and fortune at a time when the world was spiralling into despair.

Shot entirely on location in Queensland’s Gold Coast and co-starring Corey Large, William Mosely, Isabel Lucas, David Wenham, with Dan Fogler and Clive Standen, this is the story of a man whose real life exploits were arguably more colourful and outrageous than any he depicted on the silver screen.

In which Australian state or territory was Errol Flynn born?