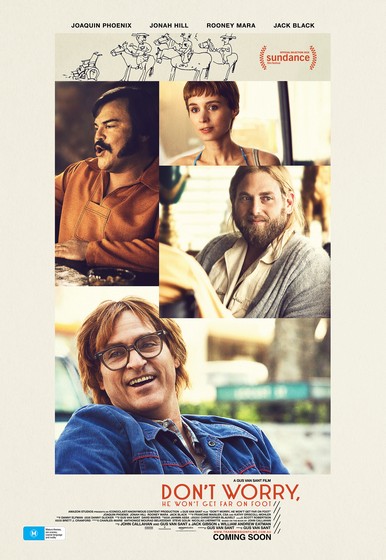 After Portland slacker John Callahan (Joaquin Phoenix) nearly loses his life in a car accident, the last thing he intends to do is give up drinking. But when he reluctantly enters treatment – with encouragement from his girlfriend (Rooney Mara) and a charismatic sponsor (Jonah Hill) – Callahan discovers a gift for drawing edgy, irreverent newspaper cartoons that develop a national following and grant him a new lease on life. Based on a true story, this poignant, insightful and often funny drama about the healing power of art is adapted from Callahan’s autobiography and directed by two-time Oscar nominee Gus Van Sant.

Director of Don’t Worry, He Won’t Get Far on Foot, Gus Van Sant, won both the Palme d’Or and the Best Director prize at Cannes in 2003. What was the film that snared those prizes for him?