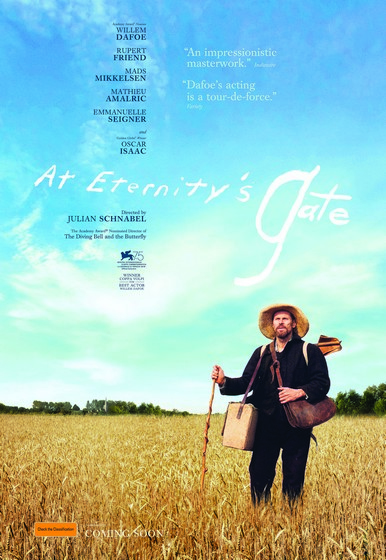 Julian Schnabel’s luminous new film takes a fresh look at the last days of Vincent van Gogh, and in the process revives our sense of the artist as a living, feeling human being. The pulsing heart of At Eternity’s Gate is Willem Dafoe’s shattering performance: his Vincent is at once lucid, mad, brilliant, helpless, defeated, and, finally, triumphant. With Oscar Isaac as Gauguin, Rupert Friend as Theo, Mathieu Amalric as Dr. Gachet, Emmanuelle Seigner as Madame Ginoux, and Mads Mikkelsen as The Priest.

Artist Vincent Van Gogh was recently the subject of another major movie. That animated 2017 film had the distinction of being the world’s first oil-painted animated film. What was its title?