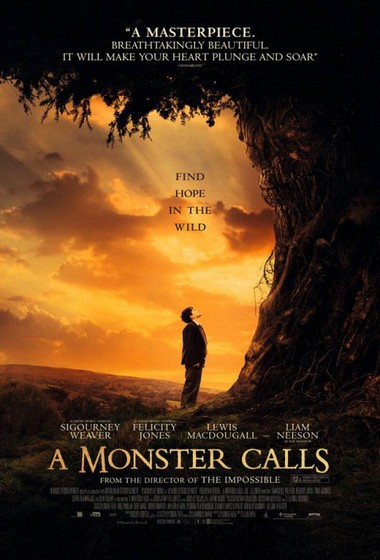 Conor is dealing with far more than other boys his age. His mother is ill, he has little in common with his imperious grandmother, and he is the target of bullies at school. Then one night, Conor summons an unlikely ally: a 40-foot-high colossus of a monster who bursts forth from the ancient yew tree in the graveyard behind his house. Guiding Conor through a dark and magical world, the monster brings stories to life. But his tales of noble princes and evil queens reveal unexpected twists; the heroes behave badly; the villains turn out to be innocent; the bad aren’t punished and the good aren’t saved. Why, Conor wonders, is the world so complicated and so unfair?

Based on the award-winning novel by Patrick Ness, visionary director J. A. Bayona brings the fantastic to life in A Monster Calls. With breathtaking special effects, this beautifully crafted film transports us with stories of courage, loss and hope, blending fantasy and reality in a bold and innovative way.

Liam Neeson provides the voice of the monster in A Monster Calls. He also provided the voice for the CGI lion Aslan in which movie trilogy?