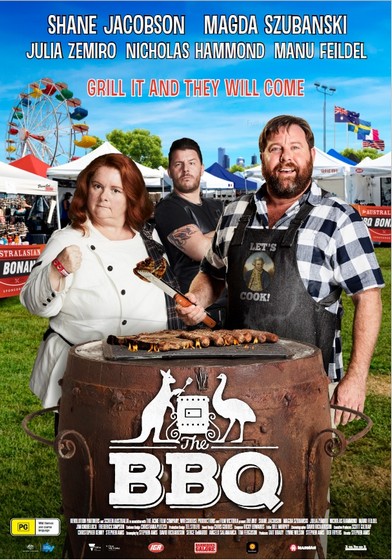 We have 5 double in-season passes thanks to Label Distribution and Madman Entertainment.

Laid-back suburban everyman Darren “Dazza” Cook loves to entertain his friends and neighbours with his weekly backyard barbecues, utilizing the ancient rum-barrel barbecue that family legend prescribes as having come from Captain James Cook’s Endeavour. Unexpectedly thrust into the limelight by his employer when an International BBQ Festival comes to town, Dazza needs to sharpen up his act, so enlists the guidance of the mysterious Scottish chef known only as “The Butcher”. As Dazza hones his chops perfecting the perfect steak, his 12-year-old son Jayden, is challenged to prove the dubious Cook family ancestral link, with unexpected results.

Magda Szubanski appears in The BBQ as a cook, but she once appeared at the other end of the food chain as a farmer in which 1995 film that featured a talking pig?