I find Richard Linklater a frustrating filmmaker sometimes. I mean, I love some of his films (School of Rock and Bernie, for example); but can’t get into others (like Boyhood and Last Flag Flying). His latest release here, Where’d You Go, Bernadette, falls into the latter category for me. This weirdly structured and ultimately thin film didn’t satisfy on any level. And worse, Linklater has to resort to cheap sentimentality to get it over the line.

The film starts off by answering the very question posed by its title (at least in the physical sense). Although I haven’t read the eponymous novel by Maria Semple on which it’s based, I understand the mystery of where Bernadette went is key to its story. So that element of mystery is immediately drained from the film. More importantly however, the screenplay (by Linklater, Holly Gent and Vince Palmo) falls apart in the third act. What should have been a journey of fulfillment becomes a wild goose chase that concludes with one of the weakest endings of any Linklater film. 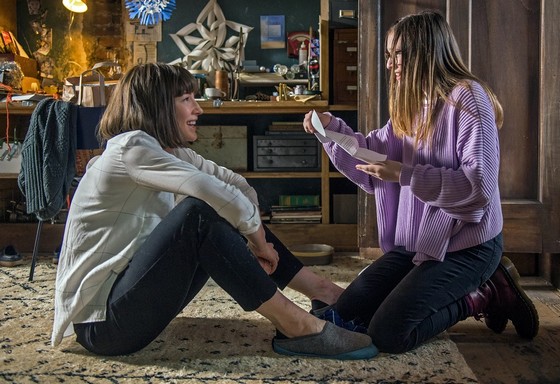 The Bernadette of the title is Bernadette Fox (Cate Blanchett). Once a rising star of architecture, professional setbacks and motherhood have seen her retreat to a ramshackle Seattle mansion. She shares the house with tech-wiz husband Elgin (Billy Crudup) and predictably precocious daughter Bee (Emma Nelson). Bernadette’s days consist of doting on Bee’s every need and meting out petty vengeances on her rather snooty neighbour Audrey (Kristin Wiig). Those vengeances however are escalating. What starts out as a neighbourhood squabble over blackberry bushes escalates into something rather more serious.

While concerned about Bernadette’s increasingly erratic behaviour, Elgin finds his hands full as an executive at Microsoft. He hires Soo-Lin (Zoe Chao) as a personal assistant to help lighten the load. Soo-Lin however happens to be a friend of Audrey’s. Bernadette views Elgin’s hiring her as an act of betrayal. Meanwhile, Bee seeks out the secret of her mother’s cloudy past.

Part of my difficulty with Where’d You Go, Bernadette lies with the main character. While Cate Blanchett is brilliant in the role, Bernadette is a difficult character to warm to. Linklater seems to want his audiences to make allowances for Bernadette’s often appalling behaviour because she’s a brilliant but stifled architect. But she doesn’t seem to be able to even plan a trip without the help of a virtual assistant (an important sub-plot in the film). And despite apparently rolling in money, she can’t manage to hire a handyman – even with her virtual assistant – to fix her leaky roof (in notoriously rainy Seattle); preferring instead to install buckets around her house.

We’ve seen plenty of movies about prickly geniuses. Part of the problem here is that despite several characters telling the audience how brilliant Bernadette is as an architect, Linklater can’t seem to show anything to demonstrate her ingenuity. I found barely a flicker of creativity in the character until the very end – when it was too late. The kicker for me however was her casual cruelty, which tended to dissipate any empathy I built up for her. The schmaltzy resolution didn’t help.

Blanchett gives her now-expected virtuoso performance in the title role. While some compare this performance to her Oscar-winning turn in Blue Jasmine, I feel there might also be a touch of that other notable woman on the edge, Blanche DuBois (a role Blanchett has played on the stage), in the portrayal. Indeed, in the latter part of the movie, Bernadette has to depend on the kindness of strangers. Billy Crudup (After the Wedding) provides a steadying hand as the more sedate Elgin; while newcomer Emma Nelson is fine as Bee. Kristin Wiig (Mother!) plays against type as the straitlaced Audrey; Laurence Fishburne (The Mule) adds much needed gravitas as Bernadette’s former teacher; and Judy Greer (Ant-Man and the Wasp) gets a nice cameo as a psychologist. The film also features a series of brief appearances from the likes of Megan Mullally and Steve Zahn.

Where’d You Go, Bernadette ended up leaving me dissatisfied. We all know Linklater is capable of so much more than this film delivers. Hopefully his upcoming projects (he has at least four on the go currently) will see a return to form.