Where Hands Touch sheds light on how Germans treated bi-racial people during WWII. The Nazis contempt for Jews is well known (and again features in this film) but the focus is on a bi-racial teen and her increasing victimisation. 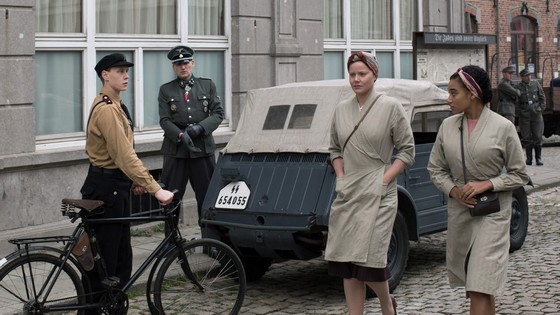 It’s 1944. In the Rhineland, Lenya (Amandla Stenberg) is coming of age. She’s the teenage daughter of a white German mother and a black father. Her mother (Abbie Cornish) has done her best to protect Lenya; but the racist credo of Nazism has rendered her a pariah for the colour of her skin. Yet she’s caught the eye of Lutz (George MacKay). He’s a member of the Hitler Youth, who dreams of serving his country proudly on the front line. Lutz’s father (Christopher Eccleston), a senior officer who fought in WWI, does what he can to protect his son, but certainly doesn’t countenance fraternising Lenya. And his desire to see out the war by whatever means possible will have dire consequences.

The film poses the question of whether Lenya’s fate is sealed or if there’s a way out. After all, her dark skin is what draws unwanted attention. Her forbidden relationship with Lutz drives the movie. Lutz’s initial idealism is soon doused by the horrors of what he sees and what is expected of him. His relationship with his father is sorely tested throughout. He’s not the only one trying to flex his muscles though, as Lenya also defies her mother … as teenagers do. Amandla Stenberg does a fine job channeling Lenya through a combination of intellect, vulnerability and resourcefulness.

Where Hands Touch was written and directed by Amma Astante (who directed A United Kingdom). uThe film lacks the naturalism of the best Holocaust movies, like Schindler’s List, The Pianist or The Boy in Striped Pyjamas. This appeared a lot more staged; which is a pity because as strong as its impact was, it could have been much stronger still.