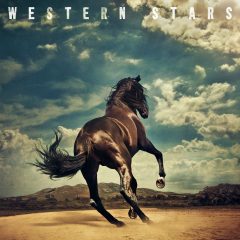 The advance word on Western Stars, the nineteenth studio album from Bruce Springsteen was a major change of direction for the singer/songwriting rock star. He’s fresh a year or so back from his sold-out solo stand performing an autobiographical monologue with songs for “Springsteen on Broadway” show, that was filmed for Netflix before it shuttered. As the title suggests, Springsteen’s turned his attention west… to the deserts and mountains of California, and a sound rooted in the classic pop sensibility of 60’s and 70’s artists like Glen Campbell’s “Wichita Lineman,” Harry Nilsson’s “Everybody’s Talkin’,” and everything associated with Burt Bacharach—a super-polished studio-produced sound with heavily orchestrated, almost kitschy, strings. While the description is quite accurate, these thirteen songs don’t feel like that great a departure from songs like “Queen of the Supermarket,” “Outlaw Pete,” and “Jack of All Trades,” from two of his more recent solo efforts. Still, producer Ron Aniello and Springsteen have captured all that was lovely and powerful about that era of richly produced folk/pop without overstaying their welcome.

But Springsteen fans will find these intricately delivered songs capturing the kinds of characters that have been filling his songs since Asbury Park days, or perhaps more accurately since records like The River (1980) and Nebraska (1982) And while the album opens with a “kid” out “Hitch Hikin’” around the west with no direction home, but mostly Springsteen describes characters later in life, often looking back with a sense of regret and loss. A few of the songs here, “Sleepy Joe’s Café” and “Tucson Train,” feel like the kind of song writing assignments you’d give an experienced songwriter who was trying to overcome a bout of writer’s block. Perfectly fine songs in and of themselves, but too formulaic to come from anything all that deep that the writer cares about.

Springsteen at this late date in his career seems to realize that some repetition can be expected. In “The Wayfarer,” he starts of with “Same sad story, love and glory goin’ ‘round and ‘round/Same old cliché, a wanderer on his way.” It’s all about lost love, and the too familiar road which becomes a home to those who can’t help looking for what’s missing. What Bruce knows is that the reason clichés work is that they connect to some common masculine myth that manages to ring true whether you’ve seen one to many Clint Eastwood movies or not. Which is the title track works so well, with its tale of an aging actor brought low enough to do Viagra commercials, “that promises to bring it all back to you again.” Somewhat remembered as someone who was once “shot by John Wayne,” that story is always good for a free drink, and the illusion of a life that’s worth living. “Drive Fast (The Stuntman)” feels like the continuation of a personality sketch that Springsteen already fleshed out in “The Wrestler,” the song which won him a Golden Globe for its placement in the movie of that name.

But like the title track, Springsteen’s songwriting craft comes to the fore in songs on the album’s back half, “Chasin’ Wild Horses,” “Sundown,” the powerful repetition in “Stones,” the achingly familiar yet irresistible “There Goes My Miracle” and “Hello Sunshine,” work together to touch that deep vein of human sadness that fans of great storytellers can’t seem to resist. In that last one, he writes “You fall in love with lonely,” and yes, we do… again and again. Nobody sits up late into the dark night listening to McCartney singing “Silly Love Songs.” No, we cling to the sad refrains of the failed country songwriter “Somewhere North of Nashville,” and the romantic widow who recalls a line of lost poetry (it’s better to have loved…) and pours out a drink while revisiting that long abandoned “Moonlight Motel.”

I remember once in an interview, Bruce Cockburn (who we used to call “the other Bruce”) told me that an artist keeps it fresh over time by turning their attention to different aspects of their craft, exploring alternative approaches. Referencing Picasso’s painting career, he said, “you have a blue period,” you paint like an impressionist, then explore abstracts. Springsteen has done that over time, especially using his solo albums have stepped away from the E Street Band, to try on new sounds, approach his craft from a different angle. He did it very successfully with Nebraska (1982), and again with The Ghost of Tom Joad (1995), and again still with Devils & Dust (2005). Time will tell, but it feels like Springsteen has forged something special here on Western Stars as well. Of course, no sooner did this record get released, then we heard reports that he’s written another album of material for the E Streeters, and plans to record them this fall, with a full band tour in 2020. You have a blue period, and then you return refreshed to what comes most naturally to you.