A compelling doomsday scenario underpins the dystopian drama, The Way Out.

Mankind is hanging by a thread after a civil war 15 years earlier. The air is polluted. Facemasks are mandatory for survival outdoors. Unless sanctioned, travel is banned outside one’s “zone”. All clothing is synthetic. Food is of a low quality and in short supply, while much of the limited, available water is contaminated. 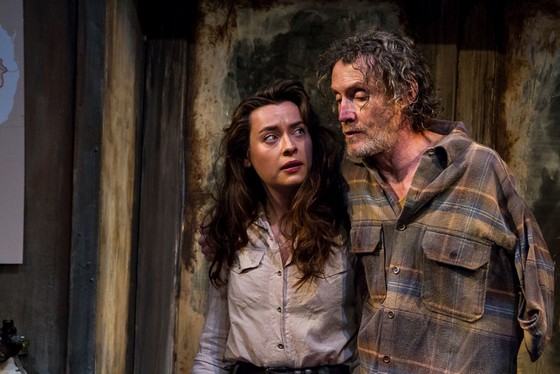 A one-armed man – former soldier Stewart (Dion Mills) – and his daughter Helen (Brigid Gallacher) are operating a pub in regional Victoria, helping to make ends meet by selling sly grog. The parents of local cop, Ryan (Kevin Hofbauer, in a role alternating with Khisraw Jones-Shukoor) helped Stewart establish the bar. Ryan is friendly with Helen, so he is on their side. So, too, is Claire (Olga Makeeva) who goes a long way back with Stewart. She though is looking decidedly sickly.

An insidious crowd known as the ARC has taken control, and is watching their every move. They have been “inspected” twice in the past six months. The latest audit is taken by a far too animated officer, Fyfe (Rory Kelly). He’s rosy on the outside and ruthless on the inside. He’s also looking to stand in the local government elections in a fortnight. One man playing both sides in a particularly dangerous game is black marketeer Harry (Sahil Saluja).

A set reminiscent of the movie Mad Max is a work of grand design (the set designer is Charlotte Lane). Redolent with dusty shades of brown, it’s totally at one with the worn-out, downtrodden characters at the centre of the piece.

I appreciated the natural, free-flowing performance of Gallacher, and was particularly taken by the stage presence of Saluja. Mills’ booming voice is a problem. It is out of step with the other actors and quite off-putting. He needs to tone it down several notches. At times I also had trouble understanding the accented Makeeva. 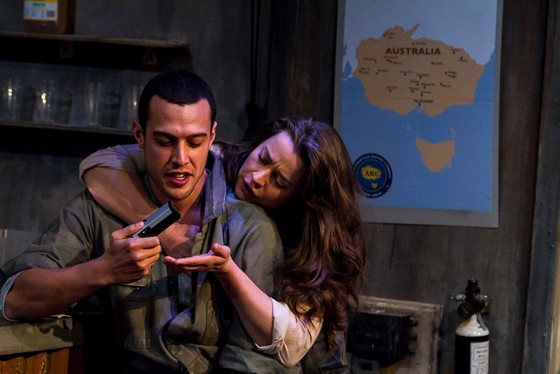 I was heavily invested in what was unfolding and really enjoying the ride, so I felt quite let down by an ending that totally confused me and left me with more questions than answers. That comes down to the inadequacies in the writing and the collaboration between the writer Josephine Collins and director Penny Harpham. More explanation or clarification was needed to make sense of it all. It shouldn’t come down to interpretation or reading between the lines.

Nevertheless, as a new Australian work – the first full-length play from Collins – The Way Out shows a lot of promise. While five years of work has seen it reach this point, still more is needed to make a lasting impression. The Way Out is playing at Red Stitch Theatre in St Kilda until 24 September 2017.