Without question one of the most fruitful pieces of science fiction ever written, ‘The War of the Worlds’ by H.G. Wells was published in 1898. That fact alone, blowing our tiny minds in the year 2020, is testament to the reach and power of one hell of a good story. 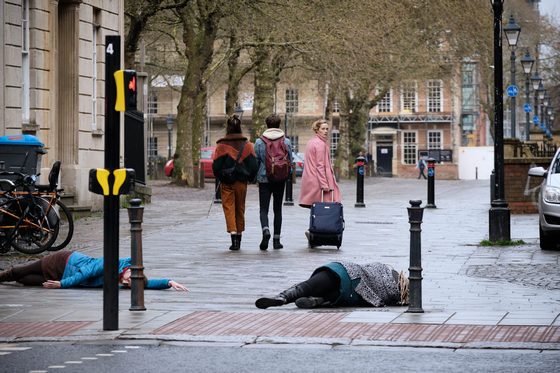 Spawning a whole host of adaptations from the truly frightening to the truly awful, it was an absolute relief to watch the pilot of War of the Worlds and observe that it does not strictly follow the red Martian goop and lasers standard.  Or at least, not so far.  Premiering on European screens in late 2019, this version of the War of the Worlds skates along the bones of the original story, removing the previously experienced schlockier horror aspects and producing instead a much more civilized and credible drama depicting the fall of humankind.

Catherine Durand (Lea Drucker) has much on her mind the day it all begins.  A strong signal from space is detected which cannot be explained away as being initiated from Earth or its satellites. Determining the transmission to be of extra-terrestrial origin, the French astronomer quickly brings her findings to the attention of the higher-ups and their response is swift.

When the meteors begin to rain from the sky, hitting densely populated areas, those on earth are left scrambling for cover. Impenetrable magnetic objects are discovered in the urban wreckage and they are also emitting some kind of radio signal of their own.  Neuroscientist Bill Ward (Gabriel Byrne) studies the frequencies and realizes that something much worse is yet to come.  Frantically trying to reach his ex-wife Helen (Elizabeth McGovern) in time before his predictions come true, Bill contacts his son Dan (Michael Marcus) in government to warn everyone of what might be ahead.  Of course, that information is kept to the chosen few.

A Fox Studios/Studio Canal production, War of the Worlds brings the horrors of the night out into the day, bleakly drywashing out the urban landscape of London and Paris and offering no relief from the decimation that the original attacks bring upon the population.  This series is stylized similar to the recent drama series Chernobyl, in that the true horrors are in the actions or inactions of the people caught up in the catastrophe – don’t come here looking for splashy high end special effects just yet.

There are a number of individuals and groups to keep an eye on; a mother with her two adult children, the cheating spouse on a work junket, the astronomer, the neurophysicist and his ex and a fence jumping border immigrant who unwittingly makes an excellent choice of transport when he escapes in an empty tanker.

Watching this with a Gen Z who had little knowledge of The War of the Worlds (other than the fact it involved conquering aliens) gave a good perspective as how this new series might be received by a fresh audience. (Completely in thrall and tense with anticipation throughout, she reports). War of the Worlds is a very modern take on a classic tale that has been worked over so many times that you’d forgive a television audience for groaning at hearing there was yet another adaptation, so soon on the heels of a British production that was also released in 2019.

There are some acting powerhouses here other than those already mentioned such as Daisy Edgar-Jones and Stephen Campbell-Moore.  Any one of their single narratives could be satisfying blown out as the focus of the action within The War of the Worlds universe.

Interested to see how this will all progress. Let me just say… robot dogs.  Scary critters.

War of the Worlds is an eight-part series dropping an episode a week onto SBS on Demand (if you are not organized enough to watch live on SBS).  The delayed filming of series two has commenced just this past week in Wales and may be something of a test case for the industry with its newly introduced COVID-19 set restrictions.