Two US soldiers are literally in the firing line in the unrelenting psychological thriller The Wall. The pair are Sergeant Isaac (Aaron Taylor-Johnson), an army ranger who serves as spotter; and his sniper partner, Sergeant Matthews (John Cena). They’re pinned down by an Iraqi sniper. But the fight becomes as much a battle of wills and wits as it is of lethally accurate marksmanship. 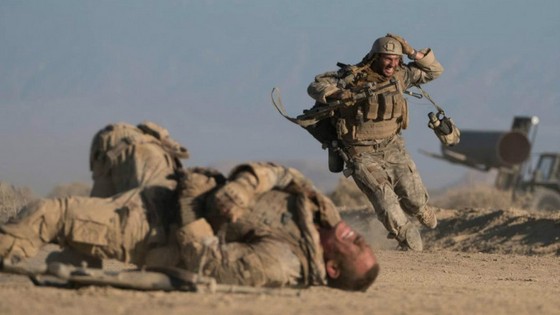 The Wall is screenwriter Dwain Worrell’s first produced screenplay and he wrote it in China, where he was teaching English. He had an idea kicking around in his head about camouflage. Throughout, the Iraqi sniper and American spotter banter and parry over the radio and their dialogue reveals commonalities as well as a vast divide. This stemmed from Worrell’s interest in language … the idea of language masking intent.

Director Doug Liman (Edge of Tomorrow) was the one who introduced the second American soldier into the script, because he thought a one-actor piece felt like too much of a film school exercise. No doubt the “buddy” element of the plotting adds to the stakes. Isaac is desperate to protect the back, so to speak, of his charge.

The ramshackle surroundings make the situation that much more anxious and alarming for the men. The so-called wall consists of only small rocks and takes relatively little force to knock down or push over. So how much cover can it really provide … and for how long? The wall that becomes a tenuous buffer between Sergeant Isaac and his Iraqi adversary is almost a character in its own right. It’s slowly demolished during the film, as Isaac and his foe fire at each other.

You find yourself asking what would – or could – you do in this situation. Part of the brilliance of the piece is, indeed, in the verbal jousting that takes place over the radio. The end game here is death and that is apparent from the get go. It is merely a question of how and where it will come.

Primarily played out by two actors – and, for the most part, one – Aaron Taylor-Johnson does a good job laying it all on the line. Apart from he and Cena, the only other character is the Iraqi voice over the radio, provided by Laith Nakli.

While set in an open desert environment, the overwhelming feeling is claustrophobia. It feels like you are trapped and surrounded in a small space and plays out accordingly. While it doesn’t have the broad canvas of American Sniper, The Wall still packs punch. Rated M, it scores a 7 to 7½ out of 10.