Malthouse Theatre’s production of Wake In Fright  is no less harrowing than when the eponymous novel was first published in 1961. But the play will make far more sense if you have an appreciation of the story before you walk in. Otherwise, I think you might understand the pieces, but not the full play in all its glory.  That however has nothing to do with the efforts of Zahra Newman, who is outstanding as the solo performer. She assumes various personas during the 70-minute show.

Rather, it has to do with the script development by director Declan Green (and co-creator Newman), which was deliberately pared back from Kenneth Cook’s novel. Notwithstanding a different and darker ending to the play, I felt the treatment short-changed the audience. It still has a great deal of raw power, but I think a fuller narrative would have had even more impact and ensured the material resonated with more people.

An often uncomfortably loud soundtrack (composition by friendships and sound design by James Paul) permeates proceedings. A maelstrom of projected visuals (lighting and projection design is by Verity Hampson) aids the cause. 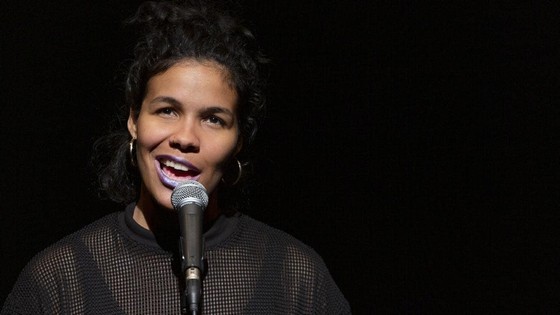 The story concerns a young bonded schoolteacher, John Grant. He’s been assigned a gruelling two-year post as schoolmaster at an isolated township in outback NSW. With school out for the summer, Grant catches a train to the mining town of Bundanyabba – known to locals as Yabba – en route to Sydney. While passing time in a pub, Grant encounters a local policeman, drinks heavily and ends up playing two-up nearby. He wins; but then loses heavily – leaving him no means to get out of town. Thus begins his descent into the abyss, but not before meeting several colourful characters and having a number of uncomfortable encounters along the way.

Greene has chosen to adapt Wake in Fright nearly 50 years after it was written because of the way Australia treats “outsiders”. These could be fellow Aussies or foreigners. What are the rules of engagement, the expectations in order to “fit in”?

Wake in Fright shines a light on Australian masculinity and national identity. We hardly come up well. As a new piece of work, this theatrical production is impactful, challenging and somewhat confusing. It requires effort to unpick.

Wake in Fright is playing at Beckett Theatre, at Malthouse Theatre, until 14 July 2019.