Vivarium is a descent into madness. It did my head in.

Tom (Jesse Eisenberg) and Gemma (Imogen Poots) are a happy couple. They’re considering buying a house together. One day they wander into a shop displaying cardboard models of the same perfectly manicured home. A strange real estate salesman – Martin (Jonathan Aris) – implores them to follow him to check out the real thing, which they do. The sales line is “Yonder – Quality family homes. Forever.” Dozens of green, rectangular houses with chimneys and black slate roofs line the streets. Above them are perfectly formed, fluffy white clouds against a bright sunny sky. 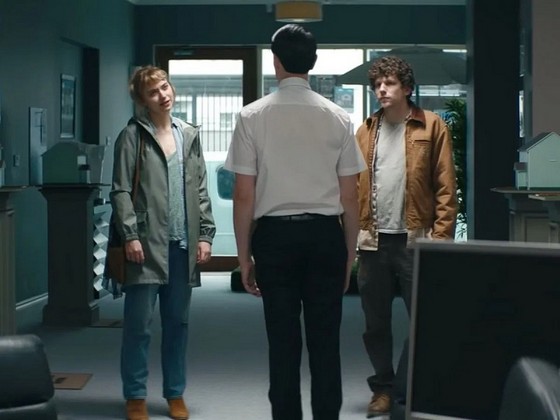 Suddenly the sales agent disappears and the pair are imprisoned in this bizarre world, where every day is ground-hog day. Try as they might, they can’t escape the labyrinthine housing development, where they are the only inhabitants. Each day a cardboard box containing food and other essentials sits in the street outside their place – number 9. Then a soulless baby arrives in the cardboard box. It grows up much faster than he would in the real world. It speaks in a deep voice, can mimic their speech patterns, often screams relentlessly and watches geometric shapes on TV. Before long both want to throttle the kid. Tom and Gemma are trapped, seemingly forever, but that doesn’t mean they don’t try to find a way out of their predicament.

Vivarium is relentless and bizarre. I longed for answers, but they weren’t forthcoming. The script by Garret Shanley – who had previously worked together with director Lorcan Finnegan on Without Name (2016) – keeps you guessing. The acting, as you can expect from the likes of Eisenberg and Poots (both of whom also featured in The Art of Self-Defense), is first rate.

Is the film enjoyable? I can’t say that, although I can admit to intriguing. Like the protagonists, I was constantly trying to solve the puzzle, left asking just what’s going on here and why? What sort of supernatural world have I entered?

Irish director Finnegan has crafted a decidedly different horror story for the modern age, where comfort and closure aren’t going to happen any time soon. He was informed by the notion that the dream of owning a home can readily turn into a nightmare.

Vivarium is available on demand from Google Play, iTunes, Telstra, Fetch and Umbrella Entertainment on 16 April and from Foxtel on Demand from 6 May 2020.