What a hoot! Who ever believed the disco ball was dead? Clearly they hadn’t seen VELVET, an ode to all that was great about the ‘70s and early ‘80s. Mostly that was about the music, but in this show – which claimed “Pick of the Fringe (Festival)” and “Best of The Fringe” awards – it concerns the “look at me” performers.

It is a cabaret and circus mix, just ever so slightly risqué, with a pulsating soundtrack. A couple of seriously buff male strongmen (Mirko Köckenberger and Stephen Williams), one an acrobat and the other a fearless aerialist, wow the audience. 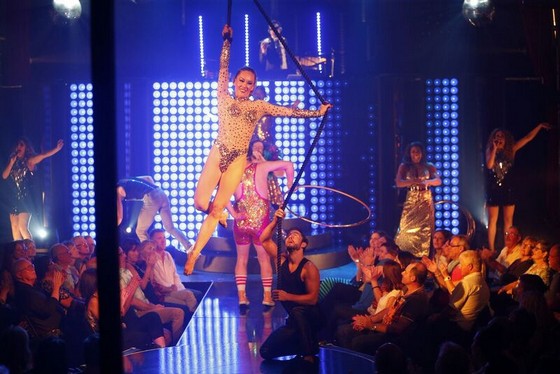 The nine-strong cast also features lithe female aerialist Emma Goh, performing solo and in tandem with Williams. The unlikely scene-stealer is a decidedly paunchy man (Scot Craig Reid) in a leotard that in any other circumstance he shouldn’t be wearing. He is to hula-hoops what Madonna is to sex. He has us eating out of the palms of his hands as he milks his mastery of the rings for all it is worth. He is at one with his props and his seemingly effortless gyrations of the same, combined with his “ridiculous” look, immediately spark unabashed laughter, wild hand clapping and wolf whistles.

For all of that though, it is the incomparable Marcia Hines who takes us back to the halcyon days of a bygone era with her velvety smooth vocals. Hines and a pair of disco divas (Kaylah Attard and Rechelle Mansour), along with Tom Oliver, belt out the familiar favourites, with the maestro of the music being Joe Accaria. He is already on point when you take your seat at The Palms at Crown, which has been set up with a catwalk as the centerpiece. Set back and above is positioned the DJ (Accaria) wearing the mandatory black sunnies.

Fifteen numbers transport you to disco delirium. They include Boogie Wonderland, Le Freak, If You Could Read My Mind, Young Hearts Run Free, Everybody Dance and Shake Your Groove Thing. Then comes Never Knew Love Like This Before, It’s Raining Men, a “You” medley, Turn The Beat Around, I Feel Love, No More Tears, He’s The Greatest Dancer, Staying Alive and, appropriately, Last Dance.

Director Craig Ilott and choreographer Lucas Newland have managed to re-create a hedonistic world in a joyous production, with a touch of sadomasochism, that channels the original Studio 54 nightclub in New York. 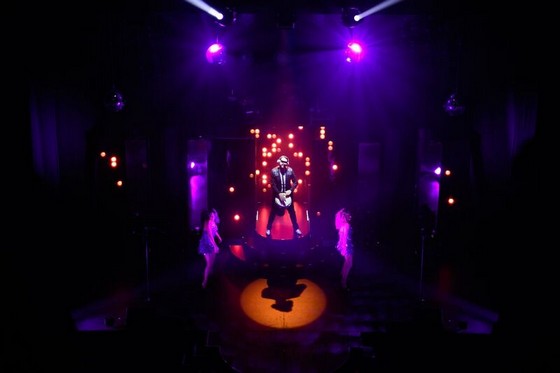 For what it is worth, by way of loose story, VELVET tracks Tom Oliver’s seduction and transformation through the lively rhythms and debauched antics of the time when disco ruled. Very much the ingénue at the start of show, by curtain fall (not literally, but figuratively) his transformation and seduction is complete, as is ours. I certainly didn’t want the music to stop. What a rush. What a glorious step back in time. Party on.

VELVET, which runs for 80 minutes without interval, is playing at The Palms at Crown until 2nd July, before moving to the Roslyn Packer Theatre in Sydney for performances from 26th July to 6th August.