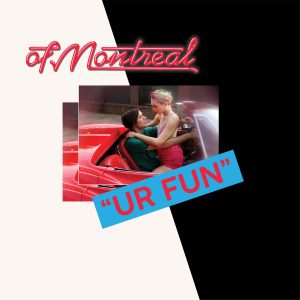 For the 16th album from of Montreal, principal songwriter and band leader, Kevin Barnes opted to make the album in isolation, playing all of the instruments himself. While Barnes often takes the band out on tour as a quintet and will likely do so this year, there’s no doubt that the music and lyrics reflect his unique take on the world, even his tendency to write and perform as Georgie Fruit, the glam rock alter ego he created on the ’07 release, Hissing Fauna, Are You the Destroyer?. According to his label bio, this new album is a continuation of Barnes’ public artistic diaries, the next chapter in a love-story with songwriter Christina Schneider, who was introduced on last year’s “White Is a Relic/Irrealis Mood.”

While Barnes tends to give each new album it’s own unique musical sound, UR FUN follows recent explorations of 80’s electro-pop with forays into EDM and post-punk alternative sounds. In fact, repeated listening to this new one had me reflecting on Barnes’ creative interpolations of the synth-pop sounds and drum machine textures that Rhino Records catalogued on their 15 volume “New Wave Hits of the ‘80s,” everything from The Thompson Twins, Thomas Dolby, and Cyndi Lauper to Kajagoogoo and Heaven 17, with nods to more obscure acts like The Nails or Bauhaus, and all those acts who followed the lead of David Bowie. Hell, every time I hear “Don’t Let Me Die In America” I find myself thinking of Jim Carroll’s classic, “People Who Died.”

The album opens with “Peace to All Freaks,” an anthem of positivity and activism with its admonition to “don’t let’s be cynical/don’t let’s be bitter/if you can’t do it for yourself then do it for us.” In “Polyaneurism,” Barnes faces the challenges of an open relationship and wonders if monogamy has to become monotony, while admitting “I can’t keep up with the girl.” In one of the early guitar heavier tracks, “Get God’s Attention by Being an Atheist,” Barnes celebrates youthful rebellion and risk-taking of one’s adolescence, always wanting more and more, and because if it’s too loud you’re too old, “we want it louder.”

Part of the fun with of Montreal is Barnes’ creative literary references and effervescent lyrical expressions, often suggestive and always provocative. While “You’ve Had Me Everywhere” leads one to expect a play by play description of all the places Kevin and Christina have gotten it on, but it turns out to be a more sentimental love song, recognizing the ways a couple becomes connected: “listening to your heartbeat, realizing it’s my heartbeat too.” Toward the end, the records emotions turn somewhat darker, with “St. Sebastian” recalling the Christian martyr often depicted as shot through with numerous arrows, thus the observation that “you may think you’re better than me, and maybe you are/but being better than me hasn’t got you very far.” Barnes pulls out the edgier punk/pop guitars for the closing “20th Century Schizofriendic Revingold-Man,” bemoaning the loneliness one feels in a world where everyone feels “so fake… so unreal.”

Lyrically, Barnes takes us on an emotional rollercoaster, but the music clicks on, hitting all the right emotional buttons by channeling all these great sounds that will connect for any street smart 80’s music fan, or likely sound utterly fresh and fun to someone hearing them for the first time.