A mixture of performance art and theatre, unHOWsed is a laudable and creative look at homelessness from the perspective of eight mature-age women (aged 50 plus to 77) who have been there. It’s a piece open to interpretation, in which a great deal isn’t spelt out. Instead, it is left to the audience to fill in the gaps and take away from it what we will.

Written by Tashmadada and Voices of the South Side, with composition by Nela Trifkovic and direction from Deborah Leiser-Moore, there is much to like about unHOWsed, but it is not without its flaws. On the positive side, the piece starts with a song from a fixed bench across the road from Theatre Works before we file into the venue. While certainly different, it sets the scene.

As we are walking through the entrance to the theatre, we hear a woman’s voice exclaiming “home does not just mean shelter, but where you feel safe”. In the artistic space we are met by the sight of eight women taking sharp intakes of breath and looking up … a scene that seems to go on ad nauseum. Too much. Too long.

Dressed casually and barefooted, the octet is sitting on wooden chairs in a sandpit surrounded by a shallow wooden thatched frame. Expressions of the homeless women’s thoughts are projected as chalk markings onto a black background at the back of the stage. “Home was frightening. Home was cruelty. I pushed the bed against the door. I needed to leave. I needed to save myself.”

Later in the piece, a projected hand writes eight lines of meaningful text onto that same wall. The left side of the bottom half of those words were too light to read … due to the lighting. I dare say a slight adjustment to the lighting design would fix the frustration inherent in that.

A portable shower – which represented the shared facilities many of those sleeping rough have to endure – was set up at the back left of the theatre. It was a theme repeatedly referred to.

One of the women is seen wheeling an old-fashioned, pink child’s car into the theatre. In it are her spartan worldly possessions, including a clipboard onto which she places a checkerboard tea towel, a plate, knife and fork, and a wine glass. She proceeds to pour red wine into the glass from a small, half empty bottle and unwrap a half-eaten sausage, which she cuts up into four pieces. She then slowly eats each morsel while taking sips of her wine.

Another woman is seen rhythmically tapping two spoons, held like chopsticks, against her body and head while the others egg her on. Yet another lies on the ground and opens a tiny grand piano and starts playing with the keys while she chants.

A number of the women start unveiling their personal stories. One was kicked out of home by her father at age seven. Another was 28 before she realised how many times she had been homeless. Yet another prostituted herself. There is clearly a lot more that could be said, but it isn’t. A bit more singing during the show and an up-tempo singalong after curtain call completes the work. 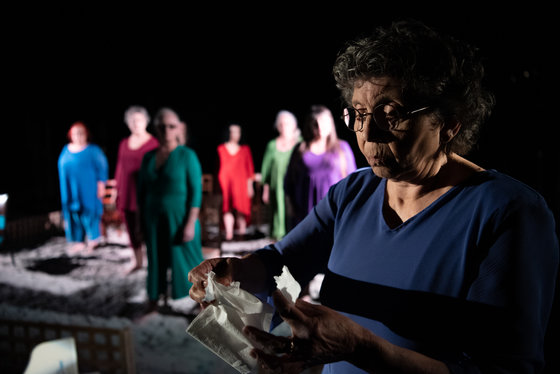 As mentioned at the outset, unHOWsed has merit, but I wanted more from it as it was underdeveloped. The piece was thin. Without it becoming a “pity party”, which the performers strongly railed against, I hoped to build stronger feelings about what these survivors had gone through.

More words needed saying (it was particularly sparse on dialogue), more songs sung and more “skits” played out. In so doing, unHOWsed could still remain a more abstract work, but then it would be one with greater substance and soul. unHOWsed is playing at Theatre Works until 3rd November, 2019.