Set in Geelong, Undertow is a psychological drama about grief, loss and toxic masculinity particularly within the AFL. It also serves up a raw portrait of a woman suffering a breakdown following an emotionally traumatic event. The title references the turbulent emotions at play in this domestic drama. 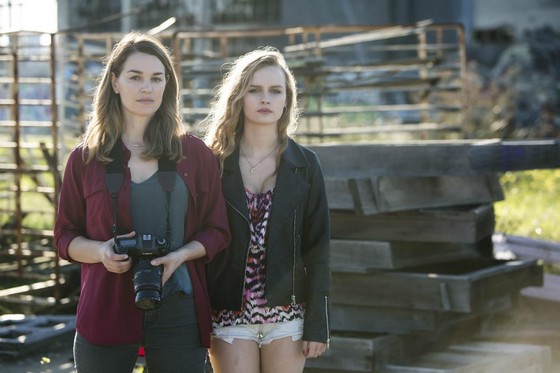 Claire (Laura Gordon) is a photojournalist who is still grieving the loss of her stillborn baby due to a miscarriage. One day she spied her husband Dan (Rob Collins) at a motel with a teenaged girl, and suspects that he is having an affair. Claire manages to meet up with the girl and discovers that Angie (Olivia De Jonge) is pregnant to local football hero Brett (Josh Helman), who is a friend of Dan’s. Claire becomes obsessed with Angie and the baby, and a fraught and complicated relationship begins to develop between the two women – one who desperately wants a child and the other who is apathetic about the child she is carrying. Claire’s obsession soon leads to tragedy.

Undertow marks the feature directorial debut for actress turned filmmaker Miranda Nation, an award-winning filmmaker who has a handful of short films to her credit. Nation spent eight years developing the script, initially intending to play the lead role herself. While dealing with some very real raw emotions and tensions, the script itself is a little uneven and seems disjointed.

An actress herself, Nation understands how actors work and is able to draw nuanced and honest performances from her small cast. Gordon (Saw V) taps into some real emotional depths here as the damaged Claire in a psychologically demanding role. De Jonge (The Visit) brings a combination of anger, rebelliousness and vulnerability to her performance. Helman’s character seems a little underwritten, and the potentially important subplot concerning his character and the toxic culture of AFL clubs almost comes across as an afterthought.

The film has been shot on location around Geelong by ace cinematographer Bonnie Elliott (Palm Beach), and gives us a strong sense of location. Elliott captures a nice juxtaposition between the picturesque beaches of this coastal region and the grittier industrial landscapes of this seaside town. Both Nation and Elliott also bring an more expressionistic approach to the material.